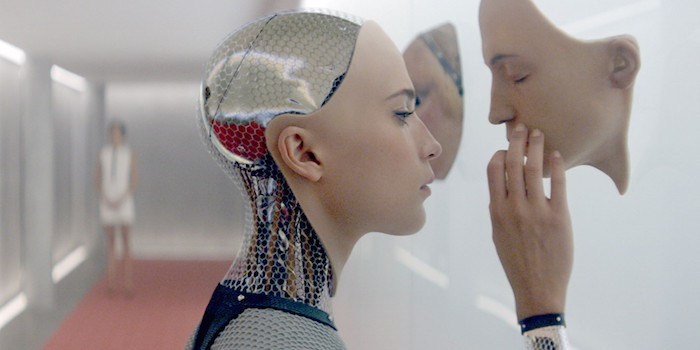 The new film Ex Machina premiered this week and it is asking some serious questions about artificial intelligence (AI). It is not a new debate. 2013’s Her did a wonderful job of exploring what love is, attachment to a mind that is far more advanced, and what it means to be alive. This time around, however, we are being taken far deeper into the discussion about good and evil, and whether or not AI will be the end of humanity.

Can we, as flawed beings create a creature that is not flawed? If we do, will they see our flaws and decide that they are the higher life form? It is something that Avengers: Age of Ultron is taking on in a big, explosive way when it premieres on May 1. Ex Machina, however, is a much quieter story. In the film, Domhnall Gleeson plays a young coder named Caleb who works at the Google-like Blue Book and is chosen to spend a week at the super isolated compound of the head of his company, Nathan (Oscar Isaac). The compound, we find, is a research facility populated only by Nathan, a silent woman named Kyoko (Sonoya Mizuno) who serves him, and a robot named Ava (Alicia Vikander). Caleb, we learn, is there as something of a test to see if Ava has indeed reached the level of AI.

This goes far beyond the Turing test, which tells us that if a human interacts with an AI and doesn’t realize it, artificial intelligence has been achieved. Caleb is allowed to interact with her, ask questions and have discussions. He’s also completely isolated, and occasionally locked in his room. Everything is being monitored and filmed. He begins by asking Ava questions — until she turns the tables on him and exhibits her own curiosity. She even seems to like him, putting on wigs and clothing to make herself appear more appealing — more “human.” Are her reactions and responses just programming? Has she developed feelings? We are definitely given an answer at the end, but the journey toward discovery is fascinating.

This modern Frankenstein tale asks a lot of questions that have been at the forefront of the debate about AI. It is especially relevant after people like Stephen Hawking and Elon Musk have come out against it. Alex Garland’s film wants to know what it means to be human. Are we a series of calculated reactions? For instance, if you desire someone, are your choices in terms of smiling, doing things to please them, etc., for a specific outcome any different than what a computer programmed to calculate reactions and respond to them correctly to produce a result would do? Can someone with many flaws (and Nathan has a lot) create a “child” who will not feel and act the same way? Is it self-awareness and self-preservation that makes you human? The film even explores the parent/child relationship by asking if once you create something can you let it go? What happens when your creation develops its own mind with its own preferences and desires?

Though you will likely discuss how close we are to AI and the science in the film, the biggest debate here will be about the ethics of creating artificial life, what it means to be human, and whether or not we have gone so far that, as Nathan says, it is inevitable. The stunning and restrained performances here will absolutely suck you in and hold you until the end. You are going to have nightmares. Trust me.