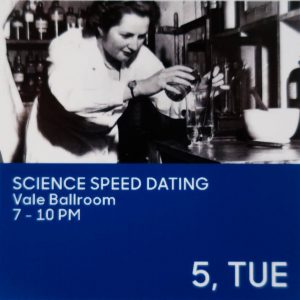 On a cold, rainy night in December 2017, a dedicated band of scientists and storytellers met at The William Vale in Brooklyn. The event: Science Speed Dating. The objective: scientists have seven minutes to talk about their life’s work, followed by a Q&A panel. While all too brief, our speakers managed to talk about problems they work with, what these seemingly obscure problems mean for the rest of us, and—perhaps most exciting for storytellers—the all important human drama behind the scenes.

Speaking of human drama, The Exchange places attendees into groups by handing out numbered keys. At this event yours truly reunited with a long-lost cousin, a SAG card–carrying actress turned software developer. The evening began with a couple of texts from said cousin, wondering exactly what kind of party I’d gotten her into. But on to the event!

Dr. Betul Kacar, an astrobiologist at Harvard University, researches astrobiology, or the biology of alien life forms. Unfortunately Earth is short on actual alien wildlife at the moment. So her lab looks at the next best thing—ancient bacteria from when Earth was a very different place. Some of these survive in extreme environments like hot springs and ocean vents; and even some modern microbes carry ancient unused “fossil” DNA, similar to how humans still have an appendix. Dr. Kacar’s work pieces this all together to imagine how life might have looked on an unrecognizable ancient Earth. She let us know what to look for to find life on planets very different from ours today.

Dr. Barbara King, an anthropologist at William & Mary, studies memory, emotion, and the roots of basic human drives such as spirituality and the desire to build community in other members of the animal kingdom. Her work is a long overdue pushback to the concept that animals do not experience emotions as humans do—a stance for which there is no evidence and substantial evidence against. While many writers and entertainment pieces focus on intelligent life on other planets, her work reminds us that other forms of sentient life are closer than we think—chimpanzees sharing our awe at dramatic landscapes, elephants grieving over lost family members, and so on.

Dr. John Quackenbush, a computational biologist at the Dana-Farber Cancer Institute, works to find how cells with identical DNA can turn into dramatically different parts of our bodies. An important part of this appears to be how genes “talk” to each other. “If you looked at all the people in the world,” he explained, “you’d find that there are some clusters of people who talk to each other a lot. Genes are the same way.” Science is finding that it’s not just the DNA that makes a cell, or an organ, or a person—it’s how they talk to each other. These interaction networks are also a key part of untangling disease, including cancer.

Sharon Sikora, a chemist and Albert Einstein Distinguished Educator Fellow, showed her science teacher bona fides right away, with each audience member getting a mysterious envelope before she began. Her work focuses on science education policy—including bringing concepts alive with in-class demonstrations. Allowing kids to engage with science early on means a stronger nation and better opportunities all around, so her work is key to national education policy. (And the envelopes, it turns out, were supplies for holding water in an upside-down cup—just a rubber band and a piece of screen. My grade-schooler sends her regards.)

Dr. Diana Roman, a volcanologist at the Carnegie Institution for Science, studies volcanoes, helping us become better at predicting deadly eruptions. She provided insight into the human side of volcano science (and most science, to be fair), which is often fraught with tension over tiny details with major consequences. “It’s also a strange job because sometimes you find yourself almost cheering for the disaster—but it’s because with each eruption, we get better at predicting the next one and saving lives.” 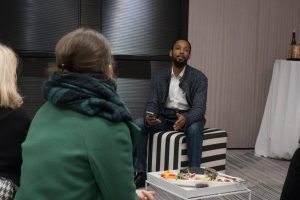 Dr. Emmanuel Taylor, an electrical engineer, consults with businesses and governments on adding efficiency and clean energy to their operations. His thoughts for the group, however, steered away from the technical and toward the why of our science decisions. Social inequality in the United States means the benefits and pitfalls of technology are poorly distributed. Science alone cannot solve these problems, but storytellers can make a huge difference by bringing these issues to the public. Emmanuel makes an impressive case for collaborations between science and entertainment.

Dr. Kate Marvel, a theoretical physicist at Columbia University, works with climate modeling, teasing out the effects of human activity on weather patterns. “People think my job is really depressing,” she said, “because we look at the effects of humans, not just the environment. Humans are terrible at dealing with small climate fluctuations”—with droughts, famines, and political collapse as frequent results of historical changes—“and if we don’t take action we’re looking at large climate fluctuations. But I look at it like this: in the ‘70s and ‘80s we saw the ozone hole and we took action. Thanks to modeling, we can see what would have happened if we hadn’t done anything, and it’s terrible. But we stopped it. We can do that again.” 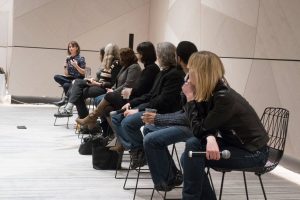