For years, I resisted watching the TV series LOST. My friends loved it, assuring me that once I started watching the show, I wouldn’t be able to stop. So it seemed a good idea not to start. But then the Science & Entertainment Exchange matched the producers of the DVD extras for Season 5 with a few good physicists for a filmed bonus feature. They sent some sample episodes, and we were hooked. We bought the DVDs of prior seasons and are squeezing in the odd episode whenever time permits. Who knew 40+ people stranded on a desert island could prove to be so compelling? (The millions of existing LOST fans, of course.)

One might be forgiven for thinking there couldn’t possibly be much science in a TV show about castaways, but one would be mistaken. There is aerodynamics in the plane crash, for instance, as well as meteorology, oceanography, and makeshift medicine as the lone doctor among the survivors tries to keep everyone healthy. And the main story arc of Season 5 relies heavily on the physics of time travel. 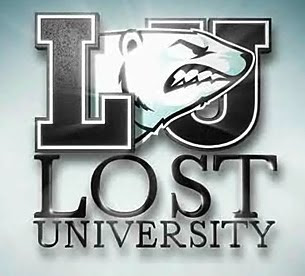 Hence the request to provide theoretical physicists for a bonus feature exploring the real-world physics behind the science fiction. But the producers went one step further: the Blu-Ray edition of LOST Season 5 will feature a fictional “LOST University:” an interactive bonus feature wherein “students” can learn not just about general relativity and time travel, but also explore the ABCs of Egyptian hieroglyphics, gain a smattering of French and Korean (two languages featured on the series), and delve into the history of philosophy. The cast and crew will walk users through basic jungle survival skills, and actor Jeremy Davies, who plays physicist Daniel Faraday on the show, will host a special segment on his favorite topics in physics.

“To be clear, the science of time travel on Lost does not necessarily obey all the rules,” Caltech physicist Sean Carroll – one of the featured instructors, along with Clifford Johnson and Nick Warner of the University of Southern California – writes at Cosmic Variance. “But understanding how the rules are broken can serve as fodder for teaching moments just as easily as seeing them obeyed.”

“Teaching moments” is a common refrain here at the Exchange. There is always a certain degree of tension between the creative needs of storytelling and the strict rigor associated with scientific fact. When it comes to film and television, story wins out every time – and it should. But even when a story takes liberties with the science, it still provides an opportunity to explore what is possible in the real world, versus on screen, in a novel, engaging format. We have only begun to tap into the enormous potential provided by these “teaching moments.”

There are many ways this can be accomplished. For instance, when Watchmen was released earlier this year, physicist Jim Kakalios – the film’s technical consultant and author of The Physics of Superheroes – released a YouTube video incorporating footage from the film into his discussion of the physics concepts that might be behind Dr. Manhattan’s superhuman powers. It’s been viewed over 1.5 million times – and still counting. Another TV series, Numb3rs, partnered with Wolfram Research on a Website providing more in-depth information about the physics and mathematics featured on each episode.

DVD extras provide another prime opportunity to talk about the underlying real-world science behind the fiction. We were thrilled to work with the producers of the LOST bonus features – and equally thrilled to provide scientists for the DVD extras for Season 1 of Fringe. (Both will be released this fall.) LOST University takes things to the next level, exploiting the capabilities of new media like Blu-Ray and interactive online games to engage viewers beyond the weekly episodes. Talking about time travel in the context of their favorite show is a great way to make physics accessible to a broader audience.

The idea seems to be catching on. Computer science professor Luis von Ahn – the man who invented Captcha to weed out SPAM bots from blog comment threads – recently proposed that university professors might consider producing “Hollywood style lectures”: videotaped lectures done on a big-budget scale, with high-quality production values. “Instead of my amateurish attempts at making good lectures that fail most of the time, and instead of repeating the same thing every semester like a broken record, why don’t I just produce really good video lectures?” he ponders.

It makes sense for science to be included in the mix as TV in particular begins to move online, and make use of interactive multimedia – particularly since so many nowadays have a great deal of scientific content. It’s good for the viewers, it’s good for the studios, and it’s good for science. Everyone wins! I, for one, am excited to see how this tremendous potential resource develops.