Science Fiction Covers the Universe, And Also Our Own Little Globe

Ever notice how often the alien spaceship lands in Washington, DC, or New York City rather than Paris, Beijing, or Rio de Janeiro? Since the big science-fiction blockbusters are Hollywood products, it’s not surprising that these films are U.S.-centric and it’s also true that Washington and New York are major world cities. Even if the aliens want to reach Earthlings via the United Nations that too requires a stop-off in Manhattan.

But CNN headquarters might be a better choice, because there’s a whole big globe out there becoming increasingly interconnected by more than the UN International Telecommunication Union, Internet, and 24-hour news cycle. International trade and finance, terrorism, global warming, job outsourcing, immigration – all of these are linking people and nations more closely. Like any other cultural product, science fiction must reflect this reality sooner or later. 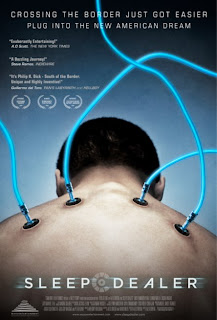 early entry in globalized science fiction is an independent film out of Mexico, Sleep Dealer, now in limited theatrical release after winning the Alfred P. Sloan Prize at the 2008 Sundance Film Festival. Directed and co-written by Alex Rivera, it explores the impact of technology outside the United States. In an unspecified near future, Memo, a young Mexican man, leaves his home village. The border with the United States has been completely sealed, but that’s no problem because technology still allows him to find a job there – sort of. Using metal nodes implanted into his body, Memo “jacks in” to a network from a cyberfactory in Tijuana to remotely operate a machine that’s welding a steel skyscraper frame somewhere in San Diego. His fellow cyberworkers perform other jobs all over the world.

The political reality underlying this technology is spelled out when Memo’s foreman says that the United States “wants our work but doesn’t want our workers.” When I appeared recently with Alex Rivera on Ira Flatow’s NPR show “Science Friday,” Rivera related that the film was sparked when he first heard about the outsourcing of U.S. jobs. Sleep Dealer extends the idea. In the film, jacking in provides jobs across the border while keeping the first world safely insulated from the third. It also allows a pilot to remotely fly an armed drone to track and kill “aqua-terrorists” suspected of stealing some of the world’s dwindling fresh water; and it permits Luz, Memo’s love interest, to share her feelings and memories with paid subscribers over the Internet, and with Memo when they have sex.

Technologically speaking, these projections are on track. Jacking in a person to operate devices outside his body by direct neural control has been a reality in the lab for several years. That’s now under study for military use by the U.S. Department of Defense. Drone aircraft, though still remotely controlled by a joystick rather than a neural connection, are used daily in Afghanistan and Pakistan by the United States. And consider the astonishing technique of functional magnetic resonance imaging (fMRI), which can correlate signals from the brain with specific thoughts and emotions. Couple this with social networking and the next step will be to download people’s deepest feelings to the Web, though maybe not with sex included.

In presenting a possible future as seen by one particular young Mexican, Sleep Dealer also presents a wider future that’s rushing toward us all. The best literary science fiction has predicted, sometimes decades early, major social trends like the implications of genetic engineering and the impact of the Internet. With some notable exceptions, science-fiction film has been less prophetic and less driven by ideas. Sleep Dealer shows that a film that approaches technology from a global perspective can offer a fresh and thoughtful look at a host of today’s issues that will continue into tomorrow.

For more about “Science Friday” with Sidney Perkowitz and Alex Rivera, visit: http://www.npr.org/templates/story/story.php?storyId=105962361&ft=1&f=1007

For more about Sidney Perkowitz and science in film, visit http://www.sidneyperkowitz.net/