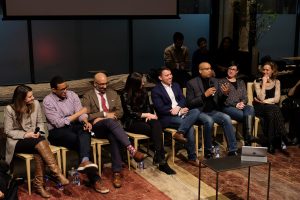 Lively scientists, entertainers, and reporters gathered this week for an unlikely event nestled in Manhattan’s swanky NeueHouse cultural center. Armed with a purple-green cocktail called “The Galaxy” and mysterious hotel keys, guests made their way to their seats in a packed lobby fitted with cushioned stairs.

If you didn’t know any better, you’d think we’d all signed up for an escape room.

If that was the case, you’d definitely want Bill Nye The Science Guy on your team, who was sitting unassumingly in the back row enjoying his Galaxy and a miniature bag of popcorn.

That’s when Ann Merchant and Rick Loverd, deputy and program directors of The Science & Entertainment Exchange, took the floor. Outfitted in a large, white hazmat suit, Merchant briefed the crowd on the history of the National Academy of Sciences, a private nonprofit made possible by Abraham Lincoln, a fan of good science policy.

After an overview on how the organization has shaped modern science work ̶ including consults with the teams who worked on blockbusters like Black Panther and Captain Marvel ̶ Merchant addressed the hazmat elephant in the room. “I am a living prop for a Virologist!” she announced to the room’s laughter.

Then, finally, a reveal. “Now, each one of your sketchy hotel keys has a number to a room. In that room a scientist will enter and will have seven minutes to blow your mind,” Rick said to an anticipating audience. One after another, the scientists would enter and enlighten us on their research, leading up to a final Q&A.

This was not an escape room, but rather speed dating with today’s top scientists.

First to arrive was Summer Ash, an astrophysicist and rocket scientist with a slew of credits and a love of black holes. Ash’s talk revolved around light; what we see, what we don’t, and how we make sense of it. It wasn’t that long ago, she mentioned, that we didn’t know anything about the universe. “We have teased so much information out of just light. And that’s what blows my mind.” Most impressive was Ash’s statement that “we are all lightbulbs,” describing heat signatures that soldiers use in night vision. At this point, a booming voice from an iPad announced “You have one minute,” to which Ash completed her talk with a beautiful metaphor and dashed off to her next room.

Munish Walther-Puri was next. He told us to picture everything that we hold dear; our most prized information. “I’m here to tell you that everything you love is tied to data. And that data is already being compromised.” An expert at intelligence analytics and data privacy with work in cyber terrorism, Walther-Puri was not shy about telling the audience the scale of the problem. And the bigger issue, he says, is our reaction to it. He quoted Dan Ariely when he said, “you couldn’t pick a better thing for us to not care about.” With shocking data on our vulnerability to hackers, Walther-Puri said the key to creating better cyber security is storytelling. “People didn’t care about climate change until we started talking about polar bears.” He says this human element can help us claim ownership of data and ultimately seek to protect it.

Ashley Llorens took the mic for an unprecedented spoken word interpretation. A temporary job at the Johns Hopkins Physics Lab to finance his record label turned into a full career on AI research. Citing famous robots like Hal from 2001: A Space Odyssey and a robotic uprising from the likes of Will Smith’s I, Robot, Llorens said that the future of AI looks more like a Big Hero 6 blooper reel, which is to say that robots don’t have as fine motor control as portrayed in Hollywood. What’s next for Llorens? Using AI to understand the human brain. When asked about space, he said, “We have a long way to go, but I think Elon Musk will get us to Mars.”

Next was Dr. Isabel Lauren Jackson, Deputy Director of the Division of Translational Radiation Sciences at the University of Maryland School of Medicine. Dr. Jackson served up her first topic, “radiophobia,” and the waves of social terror that surface after nuclear events like Fukushima. This misinformation, she says, creates a stigma. “You would be exposed to more radiation flying from New York City to Japan than you would having been there.” What can we do to protect ourselves against nuclear fallout? Dr. Jackson gave a simple tip: “You can improve your survival by almost 90% simply by staying inside a reinforced structure for 24 hours.” With a stockpile of popcorn and Galaxies, the present room looked appropriate for such an occasion.

Friendly Allen Herbert arrived with some unique insight on space. Vice-President at NanoRacks, the world’s leading commercial space company, Herbert talked about democratizing space and empowering “space-preneurs” to build new industries in space. “It’s like the start of the internet, we have one customer who’s making a space oven!” What will this space oven make first? A cookie, of course. Herbert spoke on global space programs and the power of diversity to promote the health and economy of regions, especially Africa. “When I tell people I’m doing space things in Africa, I get this funny look. Space is very important for emerging countries.” Herbert encouraged the audience to encourage black youth to look at their lives in different ways and see the possibilities ahead.
Matt Frieman entered with living prop, Ann Merchant, to tell us that at that very moment, we had the potential to breathe in 1 million viruses. Frieman informed us that if a sick child with Measles was in the room, we had a 90% chance of also getting Measles. The viruses that Frieman works on have no vaccine, hence Merchant’s attire. He went on to discuss the “story of a virus” and the origin of one deadly virus called Middle East Respiratory Syndrome (MERS), which originates in camels and was spotted in humans in 2012. To test these deadly contagions, Frieman works with mice in a lab. He found that the majority of deaths are in patients with diabetes, as evidenced by diabetic mice not being able to recover from the MERS virus.

Last but certainly not least was Dr. Heather Berlin, a hip, leather jacket-wearing neuroscientist who, at age five, decided she wanted to keep her thoughts after she died. Now a professor of Psychiatry at the Icahn School of Medicine at Mount Sinai with an impressive résumé, Dr. Berlin works to understand intricate structures of the brain. She may not be what some would call a “mad scientist,” but she will probe your brain to make it tick. “If we’re trying to find the language area in an awake person during neurosurgery, we’ll have the person count down from ten…and they start counting, we’re stimulating. And all of a sudden, they can’t speak. And then we tell the surgeon, OK, stay away from that bit, don’t cut that.” Dr. Berlin works to find novel ways to solve brain problems to promote better health and improve the lives of people with Parkinson’s Disease, Obsessive Compulsive Disorder, and more. She discussed how neural implants are being used to improve the brain’s connectivity, treat neurological and psychiatric illnesses, control prosthetic limbs, and perhaps in the future, even heighten our senses! But the question remained, is Dr. Berlin conscious? And if so, how can she hold onto it?

This seemed to be an appropriate time for the Q&A as the speakers took their places at the front with moderator and actress Kerry Bishe (Narcos). The crowd asked questions of individual panelists that may have gone unanswered as they hustled from room to room to give their talks: How do I protect myself from a deadly virus? Nuclear fallout? What’s that space cooking going to taste like? Also, what do we do about climate change? In a lively tennis match of answers, panelists gave their advice and left audience members (including Bill Nye) wanting more.