The Science & Entertainment Exchange co-hosted a panel discussion over the weekend in conjunction with Discover Magazine at San Diego Comic-Con. Bad Astronomer Phil Plait served as moderator for the event, which featured Jaime Paglia (Eureka showrunner), Kevin Grazier (JPL and technical consultant for Eureka and Battlestar Galactica) Rob Chiappetta and Glen Whitma (Fringe staff writers), Ricardo Gil da Costa (The Salk Institute and a consultant on Fringe), and Jane Espenson (Caprica showrunner). It was a lively discourse on the interplay between science and science fiction that explored many questions regarding moral quandaries with which humanity may grapple in coming years. 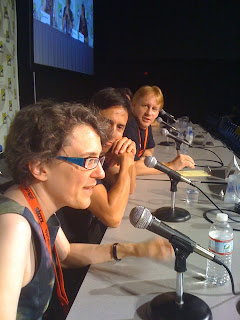 The panelists mused on ethical and philosophical issues that may trouble future generations and how they are depicted in science fiction. The topics discussed ranged from downloading someone’s consciousness into a cloned body to the chilling question of who owns the data in a corpse’s brain. Gil da Costa, as the representative neuroscientist, assured us that “the neurobiology happening at the Salk Institute is a lot more tame than what what you see on Fringe.” Fringe writer, Whitman, then quipped: “We need a Law & Order: Fringe to debate the ethical issues.”

The panel also discussed the importance of maintaining a balance between science and science fiction. “From an audience perspective, you want to start with something that’s more grounded, and then take them on that ride,” said Chiappetta of the approach on Fringe. “Start with familiar, easy to understand concepts, because then you get the opportunity to push people’s buttons.” He and Whitman acknowledge that much of the audience doesn’t really want in-depth explanations on primetime TV, and will “tune out the science if it starts getting too complicated.”

Ultimately, the panel demonstrated how shows like Caprica, Eureka, and Fringe serve a broader purpose of inspiring audiences to take a closer look at real-world science. “So many scientists go into science because they want to be Captain Kirk or Spock,” Grazier said. The questions that science fiction shows pose today may one day be answered in the real world… by their loving fans.