The Future Is Happening Now 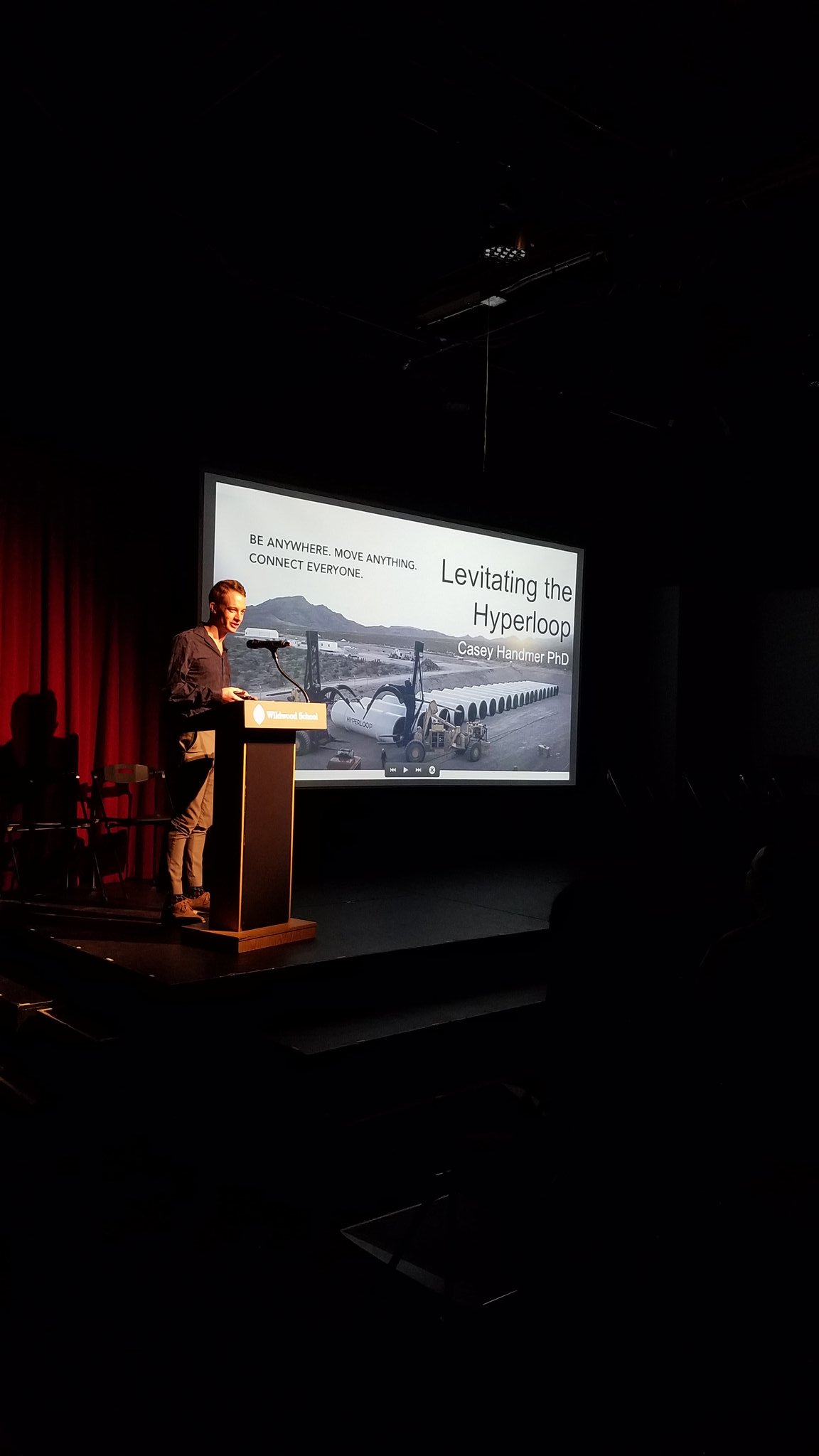 Instead of spending an hour on a cramped airplane — or plodding along in a car for six hours — what if you could get from Los Angeles to San Francisco in 30 minutes?

Elon Musk of Tesla Motors and SpaceX fame imagined this very scenario when he proposed a system called the Hyperloop in 2013. This new mode of transport would use a fixed low pressure tube with suspended capsules containing humans or cargo, racing through California at 600 miles per hour.

Many scoffed at his Jetsons-like idea, claiming that it ignores practical considerations like development costs and energy requirements. But against all odds, as I learned in the latest Science & Entertainment Exchange event, a version of the system is currently being built and tested in the Nevada desert by Los Angeles-based startup Hyperloop One. If all goes as planned, what sounds like science fiction will soon become reality.

The Exchange, in partnership between the Wildwood School, hosted “The Future Is Happening Now” on Saturday evening to highlight the cutting-edge science being done at local institutions like Hyperloop One and Caltech. Sixty-odd attendees filled the school’s auditorium in West Los Angeles to hear four talks on futuristic research topics. Afterwards, screenwriter and playwright Kimberly Barrante moderated a panel discussion, followed by questions from the audience. 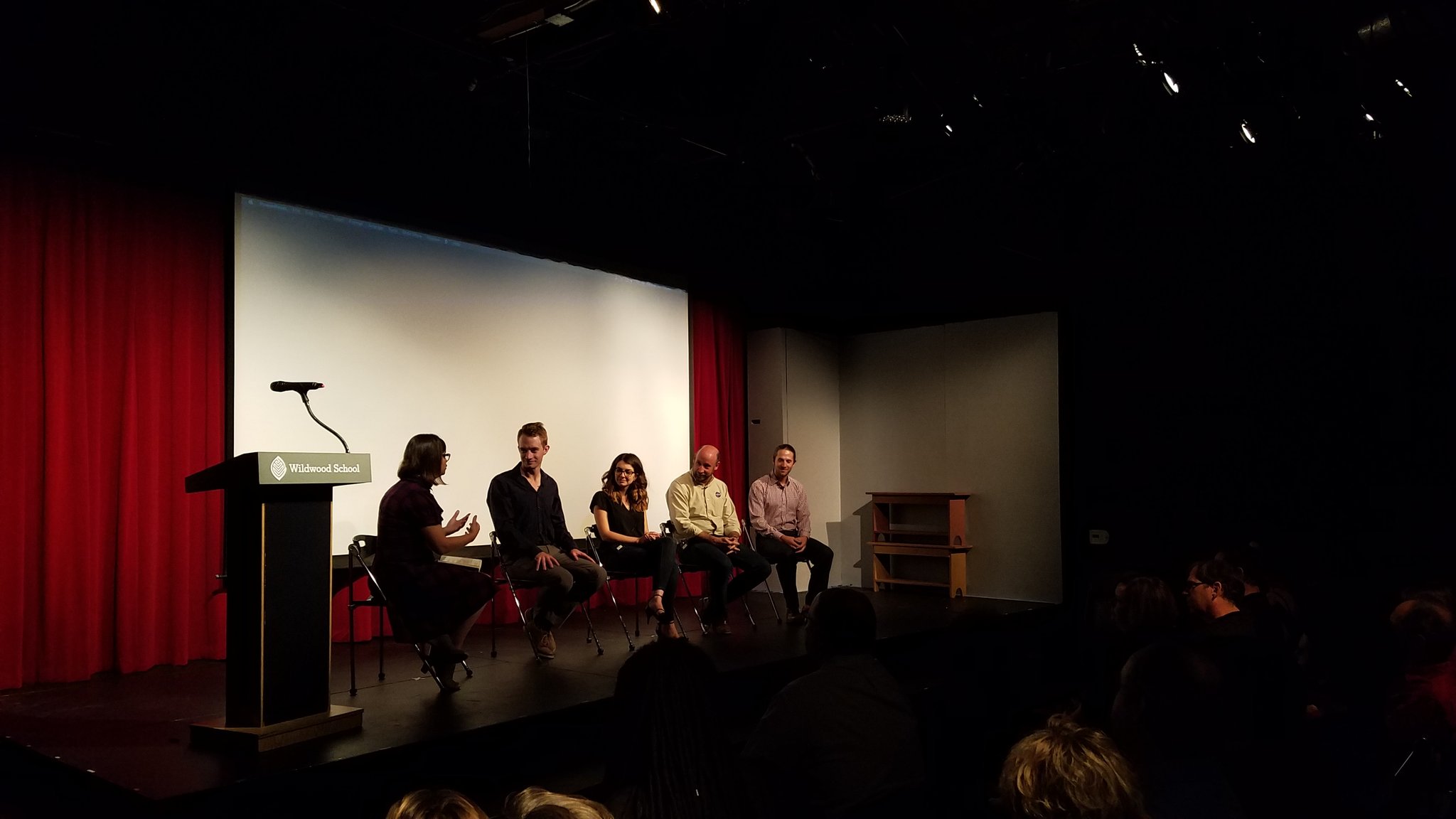 It concluded a day full of workshops and hackathons as part of InnovatED.LA, an initiative to engage secondary school students, parents, teachers, and the community with STEM.

The event kicked off with a talk by Casey Handmer, levitation engineer at Hyperloop One, who discussed the unavoidable problem of transportation. We live in the so-called Information Age, where everything from rapid food delivery to instant car service is at our fingertips. And yet, Americans wasted a whopping 8 billion hours stuck in traffic last year.

“We are able to move information around the world incredibly quickly with optical networks and so on, but humans are made of matter and atoms that you can’t just transform into pulses of light and send through tubes of glass,” said Handmer. “So in order to get from point A to point B, you have to go through every single point along the way.”

He believes Hyperloop can provide a solution to this age-old problem. The system uses electric propulsion to glide levitated capsules through a tube at faster-than-airline speeds over long distances. It promises faster transport safely, efficiently, and with minimal impact to the environment.

But levitation is difficult, especially when the considerations of carrying capacity, reliability, and cost are taken into account. In early 2017, Hyperloop One plans to test its first full-scale system in the Nevada desert, with the world eagerly awaiting the outcome.

The next speaker, a Ph.D. candidate in Chemistry at Caltech, shifted the conversation from transportation to medicine. Justin Rolando designs portable medical diagnostics with a technique called microfluidics, which uses small volumes of fluid that flow through networks of channels. Analysis is completed with a smartphone and cloud-based software.

Biological fluids — such as blood or saliva — can be automatically moved, mixed, and separated in a microfluidics device, which enables an untrained person to do complex diagnostics work. He wants these portable devices to mimic a home pregnancy test in terms of ease of use, low cost, and rapid results. However, the new diagnostics will be much more precise in their readings of molecules, bacteria, or viruses.

The last two speakers focused on the complex science and engineering required to do research in space. Maria Sakovsky, also a Ph.D. candidate from Caltech, works at the Space Structures Laboratory to design lightweight, deployable antennas for small satellites. These satellites, called CubeSats, consist of a 4-inch cube made from cheap materials that can transmit data back to Earth from space.

“These CubeSats are really cool kits that you can just buy, put your own scientific instruments in there, and launch them into space,” said Sakovsky. “NASA has proposed missions to send these CubeSats to Mars and the moons of Jupiter.”

However, the further away the CubeSats venture into space, the bigger their antennas have to be to talk back. Sakovsky works on designs for antennas that can fold up like origami for launch, and then pop back open in space. The antennas are made of carbon fiber sheets that have rubber hinges, which allow them to fold up.

For instance, Wessen and his colleagues went to Alaska to test a mobility system that floats on the bottom of ice for an upcoming mission to Europa. Another project involves a lunar mission using an insect-like, six-legged habitat module that can both colonize and explore the surface of the Moon.

To come up with new ideas, Wessen draws on his extensive experience working on notable planetary missions including Voyager, Galileo, Cassini, and the Mars Exploration Rovers. He also gets inspired by the science fiction movies and TV shows we all know and love.

“If you walk around the halls of JPL, you’ll see people with 2001: A Space Odyssey posters, Borg cubes, Millenium Falcons — science fiction is really the seed of how we get from dreaming about something, to today,” Wessen said. “There’s a quote by Godard that says, ‘The dreams of yesterday are the hopes of today and the realities of tomorrow.’ We need the stories as inspiration.”