The Science of “The Expanse”

More than 130 years ago, a fusion-drive engineer from Mars tinkered around with his spacecraft, hoping to boost its fuel efficiency. Solomon Epstein took his pet project out for a test run, expecting to see a modest improvement. What happened next enabled the Martian colony to break free from the grip of Earth and changed the course of humanity forever.

The Epstein Drive, as he called it, worked 100 times better than anyone had ever thought possible. His ship left the Red Planet in its wake as the speedometer first climbed past 5,000 miles per hour, then 40,000 miles per hour, with more than 85% of its fuel still left. The acceleration pinned him against his seat to the point of immobility, stroke, and eventual death. But what killed him allowed the Martians to mine asteroids, colonize the asteroid belt, and further expand the reach of the human race.

Welcome to the universe of the hit Syfy show The Expanse, based on the series of science-fiction books by the same name written by Daniel Abraham and Ty Franck. Although only in its second season, the space drama has already captivated fans and critics alike with political relevance and stunning visuals.

But what really sets The Expanse apart from other science-fiction movies and television shows is its realistic portrayal of life in space. The latest Science & Entertainment Exchange event, “The Science of The Expanse,” celebrated the real-life physics and astronomy that deeply influences the show. The Exchange, along with Alcon Entertainment and Syfy, collaborated to bring scientists and entertainment professionals to NeueHouse in Hollywood for science talks and a panel discussion.

“I think one of the things that attracted me to The Expanse in short was, it was an opportunity to make space and life in space a character,” said Naren Shankar, executive producer and showrunner of The Expanse, during the discussion. “Given television’s timeframe and budgetary frame, we tried to really convey what it is like to be up there, which is what science fiction has traditionally run away from.”

Shankar, an Emmy Award–nominated writer and producer, holds a PhD in applied physics and electrical engineering from Cornell University. Although stunts like flying people on wires to simulate weightlessness are not easy or cheap, he chose to embrace those challenges and lift the show to a higher scientific standard. During the panel, he cited Stanley Kubrick’s 2001: A Space Odyssey—renowned for its scientifically accurate depiction of spaceflight—as his inspiration.

The recently aired sixth episode, “Paradigm Shift,” featured flashback scenes of Solomon Epstein and the sacrifice he made for his invention. Experiencing an acceleration of 10 g, he found himself stuck in place and unable to press the emergency shutoff button for the engine.

“He’s stuck in that high-g situation, not being able to push a button and not being able to move,” said Cas Anvar, the actor who plays pilot Alex Kamal. “That’s the villain in the story, the reality of that physics. It’s him against the engine.”

The authors of the original novels, Daniel Abraham and Ty Franck, wrote the series under the shared pen name of James S. A. Corey. They serve as supervising producers and writers on the show, ensuring that it stays true to the spirit of the books. During the panel discussion, they provided insight into their early inspiration for creating the universe of The Expanse. 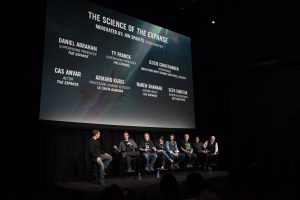 Jon Spaihts moderates “The Science of The Expanse”

“I really liked this book that I read when I was 9 or 10 called The Stars My Destination by Alfred Bester, and it took place in a solar system that was fully colonized,” said Franck. “The background of the book is the political tension between the Outer Planets and the Inner Planets, and it really resonated with me even as a little kid.”

Franck began to develop a world of his own with The Stars My Destination in mind, initially manifesting itself as an online role-playing game and then a tabletop game. At that point, Abraham suggested turning Franck’s incredibly detailed universe into a book series to sell for beer and pizza money. The first book, Leviathan Wakes, became a runaway success and went on to be nominated for a Best Novel Hugo Award in 2012.

The panel also featured Jessie Christiansen, an astronomer at the NASA Exoplanet Science Institute at Caltech; Armand Kruis, a professor of disease ecology at the University of California, Santa Barbara; and Seth Shostak, a senior astronomer at SETI Institute. 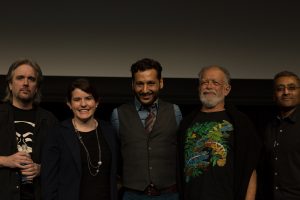 Shostak started by proposing a bet to the audience. He believes humans will find evidence of intelligent life in the next 20 years and if he is wrong, he will buy you a cup of Starbucks coffee. Although there are a handful of places in the solar system to explore, the “stupid life” (e.g., microscopic organisms) we are likely to find does not interest him as much. Perhaps checking out the TRAPPIST-1 system—NASA’s recent discovery of the largest batch of Earth-size, habitable zone planets around a single star—would give us better odds to find intelligent life, Shostak said.

Christiansen, who studies exoplanets like those in TRAPPIST-1, notes that about one in three stars has planets like our Earth. Although that does not mean they are habitable, she finds it exciting that there are hundreds of millions of potential Earths out there.

While Christiansen and Shostak discussed the possibilities of exoplanets, NASA astronaut Rick Mastracchio kicked off the event by talking about the practicalities of space travel. What would it really take for humans to reach Mars and beyond?

“Sixty percent of spacecraft that we have sent to Mars have failed or partially failed,” said Mastracchio. “We have a long way to go before we start sending people, but we’re working on it.” 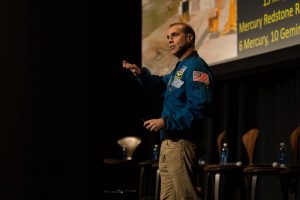 Only nine crews have been launched to the Moon, which is 240,000 miles away. Mars is 47 million miles away, which requires many times more fuel, food, water, and protection from the elements (e.g., radiation, cold temperatures). Even landing on Mars once a spacecraft reaches it is an incredible challenge, due the planet’s thin atmosphere.

Mastracchio and his colleagues have the International Space Station as a lab to develop technologies to be able to visit Mars. They are perfecting methods of water recycling, carbon dioxide removal, and radiation blocking among others.

Lastly, a science talk on bioethics raised questions about the blurred lines between right and wrong on the subject of human experimentation. Felicia Cohn, bioethics director at Kaiser Permanente, spoke about the disturbing history of Nazi experimentation in the 1940s—and how its results have influenced today’s research in a number of ways.

“Most of what they did was just really bad science—there were no controls, there wasn’t good data collection—but some of it was actually good science without voluntary consent from the subjects,” said Cohn. “Is it okay that we’re using this data? Do the ends justify the means?”

These ethical questions tie back to the show’s depiction of a controlled infection of Eros’s entire population with the Protomolecule. Cohn outlined the important factors to consider when conducting an experiment involving human subjects, such as minimizing risk, avoiding suffering, and voluntary consent.

“Science fiction gives us the opportunity to think about things without consequences,” said Cohn. “I spend my days thinking about ethical dilemmas, and these are the questions that science fiction helps us pose, think about, and hopefully one day, answer.”