New Kid on the Blockchain

One of the most important technologies you have probably never heard of is blockchain. This technology is quietly revolutionizing the banking industry, online commerce, the music industry, the legal industry, and even ethical business practices. By providing a secure, public, sharable, and decentralized way to conduct transactions, blockchain is changing the way we relate to one another.

So, if this technology is so great why is it flying so far under the radar? While it has the power to secure data, build safe online identities, and democratize the way we build transactions, it can be somewhat difficult to understand and is even harder to visualize.

Blockchain is a new way to secure data and create transactions. It is a distributed database or leger system. What this means is data are spread over a wide range of physical and digital locations rather than being stored in a central database. The data are stored in blocks (think of these as boxes) that contain a perpetually growing list of ordered entries or records. Every so often the boxes are collected, time stamped, made public, and sent out into the world. Some systems do this every 10 minutes, some every 5 seconds. It depends on how the system is built. Once the boxes are sent out, they are linked to the previous boxes in the chain and the entire chain is checked for accuracy by public data checkers known as miners. Some systems actually reward miners for being the first to verify data with cash and/or cryptocurrency such as Bitcoin. (More on that in a moment.)

Blockchain distributes data in a unique way. Data can be distributed (linked to) in a very public way (recorded and re-recorded thousands of times) but not copied. This means everyone in the system can see the data and verify them. Because the data cannot be copied, it solves the problem of duplication (i.e., as double payments) and cannot be altered without also altering every other link to the data. 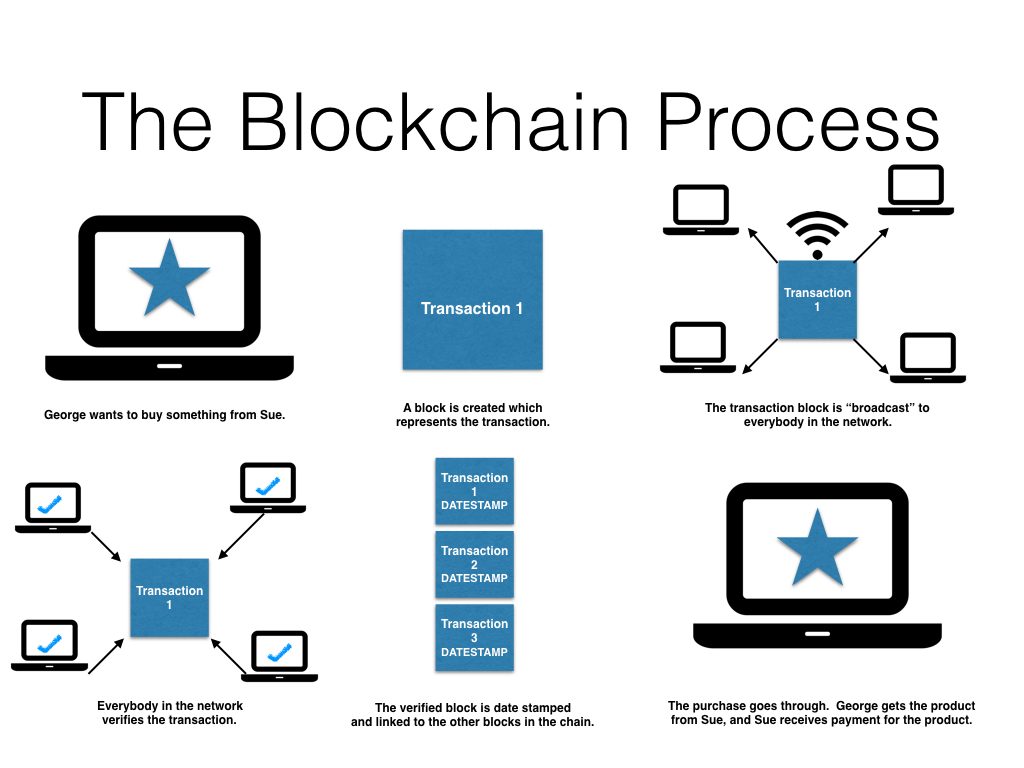 The enclosed diagram can be of some assistance here. In this example, George wants to buy something from Sue. So a block is created that represents the transaction “George buys from Sue.” Once every minute, the block chain system where George and Sue are transacting collect all the transactions that have happened in the last minute. These transactions are grouped together and sent out for verification. At this point, the digital data miners in the network compete to be the first to verify the transaction. They are not verifying the credit card information or sensitive data (they cannot access that); they are merely verifying the transaction. The first to verify gets a digital reward (a tiny Bitcoin payment), but the transaction is public and verified by many people in the system. Once it is verified, the data are date stamped and linked to previously verified blocks of data in a chain of blocks (called, not surprisingly, a blockchain). Once added to the block chain, the transaction can go through, Sue receives her payment, and George gets his item.

It is important to understand that in blockchain, you are out hundreds or even thousands of copies of the transaction records but not thousands of copies of the transaction data. It is like the difference between working in Microsoft Word and Google documents. When you collaborate on Microsoft Word, you typically create a document, make changes, and then send a full copy of the document to your colleague for editing. If you chose to make those changes without revisions turned on, it would be very difficult to tell exactly what changed from one version of the document to the other. And because you are sending out a full copy of the data, it would be pretty easy for somebody to intercept your email attachment and make a copy of it and steal your work. Additionally, you and your colleague must work one at a time. If you both work on the document at the same time, you may create conflicts that are difficult to resolve.

However, working in Google Docs is a different story. You and your colleague both “check out” versions of the document (similar to how software programmers work in dev systems such as Git Hub) and your changes are tracked in real time in the document. The software is designed to resolve any conflicts you may have in working together. And because you are not attaching and sending copies of the document around, it is less likely that somebody can intercept your email attachment and steal your work. Blockchain is like this. You are not sending data, you are sending instructions and transaction notices about the data.

So Who Knows My Actual Credit Card Number?

The actual sensitive data such as credit card numbers and more in blockchain transactions are secured using a technology called public/private key. This works just like it sounds. You have a private key (which is a long stream of seemingly random numbers) assigned to you. This is paired with another even longer stream of numbers called a public key that is available and not secret. When the public key meets your private key, the directions for utilizing your credit card or Bitcoin are unlocked, without sharing the credit card number itself. Your private key is a specialized password that gives you access to your (and only your) digital assets in the blockchain. This system is notoriously difficult to hack and is particularly good for secure digital identity management.

Blockchain allows for a democratization of technology and money by cutting out the middle man. They allow people and organizations to exchange value without powerful intermediaries negotiating the process, and of course, taking their cut. Companies like Uber and Lyft are proof that we already live in a sharing economy. However, millennials are already imagining a day where the transaction between rider and driver can be managed directly without the ride sharing company managing the process or taking a cut. For example, OpenBazaar is a peer-to-peer ebay-like system that allows buyers and sellers to interact directly without transaction fees or pre-defined rules.

These transactions are probably managed via an alternative money system, sometimes called cryptocurrency. The most commonly known purveyor of cryptocurrency is Bitcoin. You may have heard the fabulous stories of early Bitcoin adopters spending a few dollars on currency now worth many thousands of times as much. While Bitcoin is still the leader, there are a variety of alternate currencies coming into the market. According to coinmarketcap.com, there are currently more than 20 alternate currencies in the market trading for more than $1 (naturally there are many more in the penny stock range).[1]

In a world where business is increasingly conducted online—virtually outside of geographic barriers—buyers and sellers are increasingly weary of the expense and hassle of currency conversions. Cryptocurrencies like Bitcoin simplify the process by providing a single, crowd-consensus currency available worldwide.

Blockchain’s “distributed leger” technology is especially useful for storing sensitive information like medical records, identity management, and transaction processing. Because all blocks in the chain are related to one another via a timestamp, blockchain records are highly resistant to tampering. You cannot alter a block in the chain without altering all the subsequent blocks in the chain. This makes it a particularly good tool for managing negotiations and storing contracts.

This technology is particularly appropriate for the music sector. With the rise of music streaming services (including Amazon’s streaming service integrated with its home automation and digital assistant system Alexa) is an increasing level of discontent on the part of musicians and composers who have seen their royalties continue to dwindle. The frustration has gotten so high that some musicians like Jay-Z have removed their music from streaming services like Spotify. But for many musicians that is simply not an option. This could all change under new blockchain-based platforms such as Mycelium. In these platforms, power and data need not be controlled by record companies or promoters. Artists could deal directly with consumers, performers, and venues via little pieces of code called smart contracts. Bands like Toronto’s industrial rock band 22Hertz have already hopped on board, offering half-priced CDs and t-shirts to consumers who pay directly with Bitcoin. And fans who tip using Bitcoin can download songs for free. Even Nick Mason of Pink Floyd fame has suggested, writing in a paper recently published by Middlesex University London, “If blockchain technology is going to be the future, we need to dig in and make it happen.”

Peer-to-peer purchasing of car rides and music is likely to be fueled by younger people. Like crowdfunding, blockchain is of primary importance to millennials. Trust and loyalty are hard to come by in this group who came of age during the recent financial crisis and largely see corporate America as driven purely by profit. Blockchain presents an opportunity for companies to engage with millennials in a way that puts transparency and trust at the center of the transaction.[2]

“There is an inclusive principle according to which economy works better when it works for everyone, which means creating platforms for distributed capitalism,

not just a ‘redistributed’ one.”

Millennials want to know that the claims being made about products are true—especially in terms of ethical business practices. Blockchain can be used to prove that a particular diamond has been ethically harvested, that tuna from a particular supplier is actually “dolphin safe,” and that a company recycling program has actually been implemented.

Blockchain can even be used to secure the vote. Of particular interest in the current political climate is the Russian Federation’s 2016 announcement of a pilot project to explore the use of blockchain-based voting systems.[4] There is little doubt that securing voting systems and managing the fairness of the political process will be growing in importance in the coming years—especially among disenfranchised millennial voters. Blockchain is likely to make voting booths and online ballots more secure.

The year 2017 is likely to mark a turning point in the world of blockchain. During the previous year, the hype grew exponentially. We are likely to see big players stepping up to blockchain with large-scale implementations during the next year. With applications ranging from data security to crowdfunding, fintech, sharing transactions, cryptocurrency, smart contracts, supply chain auditing, identity management, and stock trading, the financial benefits are obvious.