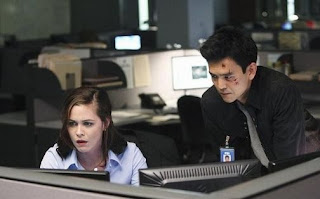 Particle physics — especially the research being done at CERN’s Large Hadron Collider — seems to have captured Hollywood’s imagination these days. First, the collider was featured in director Ron Howard’s Angels and Demons. And on Thursday, sci-fi novelist Robert J. Sawyer’s novel Flash Forward makes its network debut on ABC. The novel starts out at CERN’s LHC, and many of the central characters are physicists and engineers.

The network hasn’t let many details slip about how closely the TV series will follow the novel, but the premise is the same: everyone on the planet “blacks out” for precisely 2 minutes and 17 seconds, and during that time their consciousness is “punted” six months into the future, giving them a brief glimpse of their lives at that point in time. And Sawyer served as a technical consultant for the series: “They needed a science consultant for the show, so that tells you something about what’s going to happen.”

He also gave high praise to executive producer David Goyer: an interview with io9 at WorldCon earlier this year: “I’ve been very impressed by how well-informed David is about science and how important it is to him.”

The physics community has certainly taken note of the pending series premiere. In fact, the blog Symmetry Breaking is running several posts this week about the science of Flash Forward — with plans to post the reactions of particle physicists after they watch the pilot episode. (No pressure, ABC!) The first “science of” post is here; the second is an interview with Sawyer himself; and interested readers should tune in Thursday and Friday as well for more about the fascinating physics behind the entertainment.