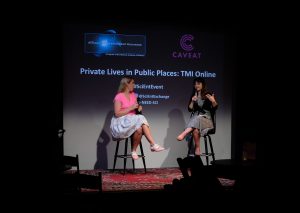 On June 13, 2018, a group of filmmakers, scientists, and enthusiasts met up at Caveat, a newly established bar for scientific hobnobbing in the East Village in New York City. Patrons wandered down a flight of stairs into a large, elegantly appointed space. With an old-fashioned library in one corner (perfect for curling up with The Origin of Species) and a sleek bar in another corner, Caveat offers curated experiences for encountering science. A slightly elevated stage lies at the center of the establishment. On this particular night, two black bar stools sat on the stage, lit up with soft pink and purple lights. The stage seemed primed for a poetry jam at a coffee shop. In fact, it was the setting of the science lecture “Private Lives in Public Places: TMI Online.”

The hosts of this event intentionally held the lecture in this cozy, inviting setting. Ann Merchant, the deputy executive director of The Science & Entertainment Exchange, explained at the start of the evening’s event that The Exchange helps scientists and non-scientists consider the many ways that science appears in unusual places in our lives, often outside traditional sites of education. In fact, she remarked, encountering “accidental curriculum” in unusual spaces such as television shows can inspire us to think of science in new ways. For instance, Dr. Jen Golbeck, the evening’s speaker, remembered watching science on television. As a child, she was fan of the PBS program Square One, a television series about mathematics. Her fascination with an episode about the Fibonacci sequence helped to further her early interest in numbers.

The evening’s program asked us to consider science in another unusual site: online. Dr. Jen Golbeck, the main speaker of the evening, is an associate professor at the University of Maryland, College Park, where she serves as the director of the Human-Computer Interaction Lab. Her training is in data science, but her specialty is social networks, social media, privacy, and online security. Her early interest in numbers and patterns translated, years later, into an interest in studying the science of social networks. When Golbeck started her dissertation research in 2001, none of her other colleagues thought that online social networks would prove a fruitful research topic. By the time Golbeck was defending her dissertation, the landscape had completely changed: online networks like Facebook were becoming a central part of people’s daily activities. Golbeck referenced the Cambridge Analytica scandal—where a British company created psychological profiles of thousands of unknowing users—to underscore the importance of understanding the relationships between you and your data, or, as she termed it, “the little footsteps that you leave behind.”

What happens to the information we share on Facebook? Who tracks what purchases we make at the grocery store? Just how much information can be acquired from online activity? Quite a bit, actually. Golbeck shared the story of a father who visited a Target store and demanded that the company stop mailing his 15-year-old daughter advertisements about baby supplies. Sheepishly, he returned a few weeks later to apologies: his daughter was actually pregnant. The daughter’s purchase history was consistent with the purchases of other pregnant women. (According to Target’s internal records, women who are about to become pregnant often buy lotion and large handbags.) Target’s advertising algorithm had flagged this and sent out the appropriately targeted advertising. As Golbeck noted, “You can’t hide from these algorithms, you don’t know what actions will reveal things.”

But, Golbeck cautioned us that these algorithms are not always bad. After all, it is nice when Pandora recommends a new artist based on our past preferences. Or when Netflix suggests a new television show to binge. She argued that ethical problems arose once the creators of these systems shifted from using these algorithms for systems of support to using them as oracles of truth. But, again, she reminded us that artificial intelligence (AI) systems are created by humans. Therefore, AI is just as biased (and unfair) as people themselves can be. Golbeck ended her presentation by stating that her goal is user empowerment; that is, that users are given tools to have more control over their data and they learn the questions to ask in order to secure their own information.

After Golbeck’s presentation, where she shared information that she and her lab learned from studies of social network users, a lively Q&A followed. Penny Lane, a documentary filmmaker and an associate professor at Colgate University, led a thoughtful discussion. Audience members asked Golbeck about her thoughts of the insular culture of Silicon Valley and the rapid pace of technological development. In one of the most intriguing moments, Lane asked Golbeck her predictions about the future of digital privacy. Golbeck considered this question. In her response, Golbeck explained that she was concerned about the children born at the start of the social network age. Social media companies, she elaborated, would have information about every moment of those children’s lives—and the ways that their parents raised them. How would researchers and advertisers use this information in the future? Golbeck left the question with us.

As the lecture ended, audience members lingered, sipping the last drops of their drinks (among other things, a David Attenborough Pilsner was on the menu). Quite a few patrons talked about how fun it was to talk to a “real scientist” in such a casual way. Caveat’s staff quietly started to transition the stage for the night’s next event—a late night dance party. The audience slowly streamed out of the bar and on to the streets of the East Village, satisfied by The Exchange’s latest offering.