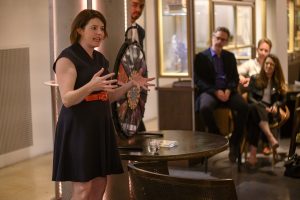 On a cool Tuesday evening in Hollywood, I find myself sitting in a circle with fifteen others when astrophysicist Jessie Christiansen walks up to us with a roulette-style carnival wheel in hand. Instead of numbers, each space features the name of a different exoplanet, or planet outside of our solar system: Kepler-186f, Trappist-1e, PSO J318.5-22, and so on. By spinning the wheel, you hop on a theoretical spaceship that can travel thousands of light-years away, land on one of the exoplanets, and find out how that particular exoplanet will kill you.

“This is my Exoplanet Wheel of Death. It turns out that humans are really fragile. There’s a very narrow set of conditions that we’re happy in, and so far, we haven’t found any planets where we’d be happy,” says Christiansen. “But we’ve actually found 4,000 exoplanets, and this is just a smattering of what we’ve found.”

I’m at another exciting edition of Science Speed Dating, The Exchange’s recurring event featuring quick-fire talks by local scientists about their work. Roughly 100 entertainment professionals and scientists gathered together at NeueHouse Hollywood, broke up into small groups, and spent the evening listening to experts from the fields of physics, neuroscience, plant biology, and infectious disease. The event ended with a panel with all of the speakers moderated by Lucy Kitada, Executive Vice President of Film at PICTURESTART.

Christiansen, an astrophysicist with the National Aeronautics and Space Administration’s Exoplanet Science Institute at the California Institute of Technology (Caltech), kicks off the event for my small group with a handful of harrowing ways to die on different exoplanets. For instance, you might be fooled into thinking Kepler-186f would sustain human life, since it has a rocky surface and the right temperature for liquid water. But once you land, you’ll be bombarded with thousands of times more UV radiation than you’re expecting, which means “either you die, or you get superpowers.”

Our next speaker, Ari Novy, brings a very different prop to assist his quick-fire talk: a bag of produce from Trader Joe’s. As a plant biologist and President/Chief Executive Officer of the San Diego Botanic Garden, Novy hits us with a laundry list of weird and amazing plant facts. 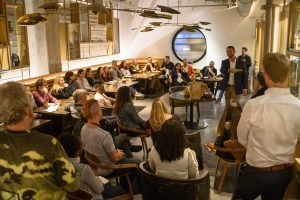 “Brussels sprouts, broccoli, and kale are the same species of plants, right?” says Novy. “In the same way that all dogs come from wolves, whether it’s a chihuahua or a Great Dane, we have domesticated plants all over the world. And in some cases, different cultures have taken a single plant and moved it into very, very different morphology.”

Those three vegetables—along with cauliflower, cabbage, collard greens, and kohlrabi—are all cultivars of the species Brassica oleracea. They would not be found growing wild in nature in that form, and neither would most of the produce we know and love. Undomesticated corn looks like a little grass with hard seeds on top, while strawberries and sunflowers grow to a much smaller size in the wild.

Infectious disease epidemiologist Tara Kerin visits our group next, with viruses as her topic of choice. We know of about 300,000 viruses that infect mammals, and 200 of those will attack humans. Along with all of the other dangers brought about by climate change, Kerin warns that diseases affecting developing countries will spread to those in other parts of the world due to a rise in the number of mosquitoes.

“I believe today in Paris, it was over 100 degrees. We are all becoming more tropical, and this is happening very regularly,” says Kerin, a project scientist at the University of California, Los Angeles, researching pediatric HIV and ZIKV infection. “We’ve already seen Dengue, which there is no vaccine and no cure for, increase 30-fold in the last 50 years.”

Switching the conversation back to physics, Spyridon Michalakis discussed abstract concepts like time travel, spacetime, and the quantum realm. Going back in time, as the Avengers did in Avengers: Endgame, is much more difficult than going forward into the future. As a comparison, why can’t we jump up and go flying into the air? Why do we always fall back down to Earth? Because while we think of ourselves as only moving in space, we’re actually moving in spacetime.

“To go back in time, you must break the second law of thermodynamics, and then obviously you have to go quantum. Because in the quantum realm, the forces that force you to have one dimension in one direction disappear,” says Michalakis, a mathematical physicist at Caltech’s Institute for Quantum Information and Matter. “Particles and everything else don’t have any notion of like, this is the next day that I’m supposed to be in. It’s completely pluripotent.”

So, in other words, Avengers: Endgame got the time travel part right—almost. The only way to travel to the past would be to enter the quantum realm as they did, find the pathways that correlate with other parts of spacetime, and zoom out again. But while the world may look like the 1975 you remember, it can never be the 1975 that you actually lived through in your past.

Rounding out the evening was Patrick House, a neuroscientist at the Allen Institute for Neuroscience, who treats us to a fascinating discussion about the sameness of being. While we as humans like to think of ourselves as taking this unique, privileged path to get to where we are as complex living things, we are actually a consequence of and made out of the same stuff as the simplest single-cell organism.

“Imagine a power station in the early 1800s, you’d put a little wheel on a river and generate a bit of power from the water,” he says. “Now imagine you had to take that power station, keep it going for 200 years without turning it off, and you then had to switch through steam, coal, electricity, nuclear, solar, and so on.“

Neuroscientists like House use such a metaphor to think about the evolution of the human brain. Putting parts of a nuclear power plant on a water wheel, for example, would probably cause several corrosive incompatibilities to arise. Similarly, transforming a Model T into a Lamborghini without ever turning the car off would leave all sorts of seemingly odd remnants of the past. We are nothing more than an elaborate version of an organism who inherited these legacy methods of survival from our roots as a single cell all those billions of years ago.