What might happen to an idealistic marine biologist after he decides to leave the Ivory Tower? If you’re Randy Olson, you become an independent filmmaker. First, you make a splash with a short music video about the sex life of barnacles. Then you take on intelligent design and the failure of the scientific community to make their counter-arguments about evolution convincingly to the public with a quirky documentary called Flock of Dodos. And then you see An Inconvenient Truth, and decide there really needs to be a documentary about global warming that lets the scientists speak for themselves. 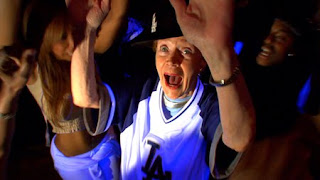 Unfortunately, scientists have traditionally ranked right down there with, well, barnacles on the list of Least Telegenic Life Forms. So Olson finds there are very few people willing to invest in a documentary featuring scientists. “My neighbor’s a scientist, and I certainly wouldn’t pay to see him on screen,” one potential investor bluntly says. Olson finally gets some meager funding from a neighborly gay couple, Mitch and Brian, who care deeply about the problem of global warming. “We’re really, really upset about it,” says Mitch. “We just don’t know why.”

The quest to find out why Mitch and Brian are so upset about global warming — and why the rest of us should be, too — provides a handy narrative framework for SIZZLE! A Global Warming Comedy, Olson’s 2008 feature film, which makes its NYC premiere on October 23, at 7 PM, to close out the second annual Imagine Science Film Festival. If you missed SIZZLE!the first time around, and plan to be in NYC on October 21, reserve a seat now for the free screening at The New School’s Tishman Auditorium.

SIZZLE! is a celluloid hybrid, more “mockumentary” than documentary, blending the real with selected fictional elements and a colorful cast of characters. You’ve got Mitch and Brian (actors with LA’s legendary Groundlings playing exaggerated versions of themselves), so obsessed with finding a celebrity host for their documentary that they take to stalking random celebrities on the streets of Los Angeles. (“Okay, Christina Ricci ran away from us…) There’s the sound guy, Antoine (Ifeanyi Njoku) and a chronically late cameraman named Marion (Alex Thomas), who is skeptical that global warming is real and keeps interrupting Olson’s interviews with the scientists: “I just think it’s a scam, man….” There’s even a cameo by Olson’s 83-year-old mother, Muffy Moose, who sneaks off with Antoine and Marion to go dancing at a hip-hop club. (Just call her “Muff-Diddy.”)

Will Muffy Moose forsake the Midwest to cut a hit single with TimbaLand? Will Mitch and Brian find their celebrity host and figure out why they’re so upset about global warming? And will Olson be able to let go of his scientific obsession with data to find the human story of climate change? You’ll just have to check out the film to find out.
The statements and opinions expressed in this piece are those of the event participants and do not necessarily reflect the views of any organization or agency that provided support for this event or of the National Academies of Sciences, Engineering, and Medicine.