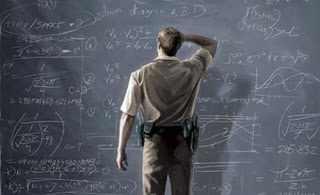 Eureka is an affectionate paean to the small town, with a twist: it’s population is made up of brilliant scientists, all of whom work at a vast, sooper sekrit lab called Global Dynamics that gets a large part of its funding from the Department of Defense, yet is dedicated to curiosity-driven research — at least in principle. The show is a dramedy that combines elements of Northern Exposure and The X-Files, according to Paglia, with a dash of Scrubs for good measure. “It’s small town trappings with endless possibility,” he says, and admits the show’s premise is at least partially inspired by places like Los Alamos, Berkeley Lab, Livermore, Bell Labs, even Area 51.

Among the tidbits Paglia divulged is that we will finally get to explore the town’s early origins in the upcoming season, which is slated to begin airing in July — although he avoided specifics on exactly how the writers plan to explore that history. He also mentioned plans for a cross-over episode with another SyFy series, Warehouse 13, and he toyed with the notion of a possible spinoff series focusing on the town’s kids at the Tesla School.

As Paglia said, the kids are some of the best characters, and we only occasionally get a glimpse of their lives. A high school science fair in a town filled with scientific geniuses is a wonder to behold. And instead of jocks lording it over the geeks and nerds, being smart is cool, with academic achievement valued far more than athletics.

For his part, Ferguson stumped the assembled science geeks by asking about Janelia Farm — probably the closest thing to a real-world counterpart to the fictional town of Eureka. It’s an interdisciplinary research campus founded by the Howard Hughes Medical Institute, located near the town of Ashburn, Virginia. At Janelia Farms, the scientists come from all over the country on six-year contracts and get all their funding internally, bypassing the traditional grant process. They all live nearby and work together in the same building, which makes it easier to collaborate across specialties.

Janelia Farm sounds like a fascinating experiment, but one doubts they’ll ever grapple with the kinds of complications that routinely plague Eureka: AI attack drones gone rogue, everyone in town sharing each other’s dreams, nanobots pervading the lab and taking on the form of the local stray dog, rips in the fabric of spacetime, and Fargo literally turning green. 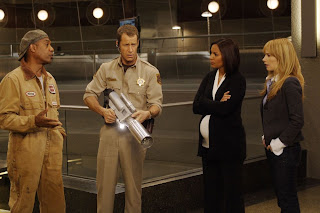 Paglia is well-versed in the culture of science, since his father was a researcher with the UCLA Medical Center for decades, and even spent some time at NASA training to be a medical officer for future manned missions to Mars. The Eureka writers also get assistance from their technical consultant, JPL’s Kevin Grazier (who also consulted on Battlestar Galactica); the writer’s blog, Eureka Unscripted, currently has a two-part interview with Grazier posted. Even the cast gets into the science act: Ferguson and co-star Joe Morton, who plays Henry, are both science buffs, and have been known to take issue with draft scripts where they felt the science was a bit too implausible

It’s always an interesting dynamic weaving real science into science fiction. Paglia and his writers try very hard not to resort to the equivalent of “magic,” even though the science as depicted on the show is very much fictional (and far more advanced than our own). That said, the story always comes first.

What Eureka does best is capture the culture of science: the almost childlike enthusiasm and sense of wonder about the world, and the endless curiosity that drives scientists to ask questions, test theories, all of which leads to even more questions. They worry about their funding, deal with family crises and lab mix-ups, and above all pursue interesting science. For science aficionados, Eureka is definitely their kind of town.