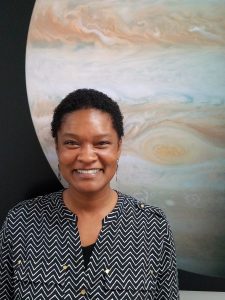 As a child, Tracy Drain had always been drawn to space and space exploration, partially inspired by the sci-fi movies her mom would take her to watch in the theater. Years later, she landed her dream job at NASA’s Jet Propulsion Laboratory (JPL) as a systems engineer. We spoke to her about being an Exchange consultant, the lifecycle of a NASA project, and a common misconception about space that drives her nuts.

At what age did you feel yourself drawn to science and engineering? How did you decide to pursue STEM as a career?

I have been interested in space and all things space related from a very young age. I really loved Star Trek, Star Wars, Battlestar Galactica—all those really great sci-fi television shows and movies, mainly because my mom was always into that stuff. She would often take me and my brother to go see movies with those themes.

It was around my junior year in high school that I tried to focus in on what I wanted to do for a career. I thought about astronomy, but did not have a good idea of what an astronomer actually did. I chickened out a little in choosing engineering because it felt more concrete; it was easier to imagine what I would do with an engineering degree. I chose mechanical engineering because it seemed to have a broader application. In case I did not land my dream job with NASA, I figured I could always build refrigerators or something.

But thankfully, you did land your dream job in the end. How did that happen?

When I was in school at the University of Kentucky, I had a really fortunate break that the co-op office there had a contact at NASA’s Langley Research Center. That was the thing that let me get my foot in the door. I worked there for a fall, spring, and two summers. After that, I went to grad school to get my master’s degree in mechanical engineering at Georgia Tech. JPL had sent people to a career fair, and embarrassingly, that was the first I had ever heard of the Lab! They hired me right out of grad school in 2000, and I have been here ever since.

What projects have you worked on at JPL so far?

What is a typical day like for a systems engineer at JPL?

The one thing I love about my job as a systems engineer is that there really is no such thing as a typical day. It changes dramatically over the lifecycle of a project, which goes like this. In the early phases of a project, the scientist community and NASA decide what it is that needs further study. Take Jupiter, for example. How was Jupiter really formed? Related to that question are things like: Does Jupiter have a core? How big is the core? What is the water vapor content of the atmosphere?

Next, a call for proposals is sent out and engineers work with scientists to figure out how to go about finding the answers. Can we use a telescope on Earth? Or do we need to send a spacecraft all the way to Jupiter? Can it just fly by the planet or does it need to go into orbit? Then, we come up with a specific design for the spacecraft and instruments. For the instruments: they are often selected through a parallel proposal process. For the spacecraft side: if a spacecraft is going all the way to Jupiter, we work through big design questions like: Does it need nuclear power? Or can we use solar power? If we use solar power, how big would the arrays need to be? Over time, we mature the design to a very high level of detail, then build parts, and assemble them. There are many points throughout the design process for testing things, performing analyses, etc., to ensure everything is going to come together smoothly and perform the way we expect. Eventually, we launch the spacecraft. Once we are in this operations phase, we are getting the data back from the instruments, but also managing the health of the spacecraft.

So far, I have worked on projects starting from the middle of the design phase through the final assembly, testing, launch, and operations phases. My job focuses a lot on troubleshooting and resolving design disconnects. For example, early in the design phase a telecom engineer might want 100 watts of power to make sure the signal back to Earth is very strong and easy to lock onto, but the power system may be providing only 500 watts for the entire spacecraft. The systems engineer’s job is to work with engineers from both of those areas (and the rest of the spacecraft too) to explore the trade space and figure out the best approach.

It sounds like you really need to have a big-picture view of the project. What are some common misconceptions about space that you tend to encounter?

When I am watching movies, one thing that makes me bang my head on the table a little is when there are scenes showing ships moving through the asteroid belt. Asteroids are actually hundreds of thousands of miles apart! I can kind of understand why filmmakers do it, though; it is hard to get a sense of being inside the belt if you cannot actually see any asteroids … and it does add dramatic effect. But still; it makes me a little nuts.

I had no idea that was the case! Is that the kind of thing you discussed in your role as an Exchange consultant?

First off, I love everything about The Exchange. I love the whole reason behind why The Exchange exists—in order to get more information flow between scientists and engineers and the people who create content for the public so that we can improve the public’s awareness of, interest in, and excitement about the real science and technology that is out there.

I have been involved with giving talks, speaking on panels, and a handful of consultation phone calls and lunches. The first time I heard of The Exchange was when I was asked to come give a talk at one of the Science Speed Dating events: an evening where each speaker has just seven minutes to talk about the topic of his or her choice. I chose to talk about the Kepler mission. Usually I give that talk in an hour, sometimes an hour and a half, so it was really educational for me to try to pull out the key bits that would be interesting for an audience like that and condense it down to seven minutes. In the talks, I focus mainly on just sharing cool information about missions I have been involved with. But yes, in the consultation talks, we get into what kinds of things are or are not plausible. It’s been fun—and it is also teaching me to appreciate some of the choices filmmakers need to make in order to serve the story they are trying to tell.

Lastly, any television shows or movies that you enjoyed watching recently?

The Expanse. I am so impressed with that show! I love the fact that they are trying very hard to be realistic about the impact gravity has on everything and the difficulties related to light-time delay when communicating. I really love that show.