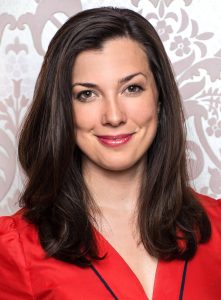 Cate Adams has worked for Warner Bros. Pictures since 2011 and is now Vice President of Production of the studio. She worked on the development and production of Inherent Vice, Midnight Special, The Nice Guys, and most recently released, The Meg, a thriller/fantasy film that focuses on saving more people than expected from a prehistoric shark. She has also recently picked up Harry’s All Night Hamburgers, a sci-fi plot based on Lawrence Watt-Evans’ 1987 notable short story Why I Left Harry’s All Night Hamburgers, and is currently still in development with writers for the script. In her free time, Ms. Adams serves on the steering committee for the National Academy of Sciences’ The Science and Entertainment Exchange, a nonprofit organization that aims to bridge the gap between scientists and filmmakers.

One of your newly released projects, The Meg, is already being compared to classics such as Jaws, Jurassic Park, and even the Fast & Furious franchise in reviews from viewers who watched it this past weekend. Can you tell us more about your role in its development? What were some of the decisions you made? What is the creative process like?

I was one of the first execs to read a draft of the project going on 4 years ago now and was excited about the potential for the film. We had some notes and ideas about how to shift the plot and action of the film and worked with the writer to make those changes before fully signing on. Once Warner Bros. became officially involved along with our Chinese partner Gravity, we helped package the film, including selecting the director, additional producer, and cast, and we gave creative notes throughout the prep, production, and post process of the film. This includes everything from character arcs and themes to the design of the shark. I gave one specific note about making the shark’s eye larger during the VFX development process, which the director liked and implemented.

Oh goodness! People can and have written books about the creative process so it’s hard for me to condense here, but I will just say that from my perspective as a studio executive, I try to do my best to support writers’ and directors’ creative goals for a project in a way that I think will connect with audiences and allow them to enjoy the cinematic experience.

The Meg is based on the book Meg: A Novel of Deep Sea Terror and its sequels. When the foundation of a project is based on a book, how do you determine how much of the script stays true to the book? How are these decisions made and what affects these decisions?

Particularly in the case of adapting novels (as opposed to short stories or even comic books), there’s often more content in the source material than we’re able to include in a 2-hour movie. As such, we try to maintain the specific characters, major plot points, and overall feeling that the book embodies and then translate that to the screen. The decisions usually come out of creative discussions between the writer, producers, director, and studio, and we advocate for what we feel is important to maintain in a film.

Congratulations on picking up and overseeing production for Harry’s All Night Hamburgers! Considered a sci-fi spec reminiscent of Back to the Future and The Hitchhiker’s Guide to the Galaxy, are there any details that you can/want to share about it?

Thank you! I love Harry’s. We are still in the development stage with our writers but hope to bring on a director sometime this fall.

What makes you really consider a script?

First and foremost I have to believe in the concept and potential for a broad audience movie that we can make at the studio level. While I enjoy watching more indie-type fare, I’m tasked with finding and bringing in material that I think can work for global audiences. This necessitates either a big idea or meaningful attachments in the form of a director or talent. Then as I’m reading, I look for characters I connect with, themes that feel universal, and an enjoyable ride in the read. Essentially, do I want to be in the world the writer has created and immerse myself in the experience of watching it on the big screen?

How much of your time is spent reading new material?

My work time is split between assessing new material, reading samples for existing projects, analyzing scripts for existing projects, and then managing a myriad of aspects of development and production on films in their various stages. I don’t have anything in production at the moment, so more of my time is focused on finding new material and getting it to the greenlight stage, however it shifts week to week and month to month.

How has the sci-fi genre changed for you as you’ve grown from a viewer to being an instrumental part in making these films?

I loved watching sci-fi as a kid and imagining all of the possibilities and various adventures that someone could go on. What’s shifted primarily is that I now get to work on the stories that I hope will inspire others. Some of the peeking behind the curtain of the magic of movie making takes away some of the childlike wonder, but really I feel blessed to get to work with filmmakers and producers who have made some of the films that inspired me to get into the business.

Do you think that science is accurately portrayed in the entertainment industry?

I think it varies based on the type of material and filmmaker presenting the story. A splashy popcorn film that has a kernel of science in it may not portray the science exactly as it happens in the real world, whereas a drama or more serious telling will be more precise in its presentation of scientific principles. I think we try to present science in an inspiring and accurate way for the most part and hopefully the message comes through!

How do you stay inspired? How have these inspirations changed, if they have, through your experience in the industry?

My primary inspiration comes from having creative conversations with all sorts of different talented people, whether it be writers, directors, or people who work in completely different fields. I listen to lots of podcasts to hear about new stories and try to get outside of the Hollywood bubble whenever I can.

Do you find it harder to get started or keep going on a project?

For me it’s probably harder to keep going on the projects that hit stumbling blocks or have the potential to get stuck in development. When I’m starting on something new I feel really energized and excited about the potential for the project. That said, I try to work on projects that I will be as passionate about on day 100 as I am on day 1.

When I was younger the films that made me love the cinema and storytelling were along the lines of Contact, Amelie, and Cinema Paradiso. I also loved the Back to the Future series and Indiana Jones. In terms of today’s filmmakers, Christopher Nolan is an incredible master of visual storytelling and certainly an inspiring figure. I’m also inspired by people who use their storytelling as a force of goodwill and hope.

How did you get involved in The Exchange?

A friend told me about The Exchange and some of the events they host throughout the year. I got on the invite list to attend more of them and then also called on The Exchange to put writers and directors in touch with scientists on various projects in development. This was probably over 4 years ago now and I’ve enjoyed attending events and helping spread the word to other friends in the industry.

What is the best piece of career/life advice you have ever received?

I can’t fully recall where this quote came from, but a colleague once said to me “The movies don’t love you back.” As someone who is a self-described workaholic, I think it’s important to remember that although I fight for projects and films because I love the stories, it’s more important to focus on the connections you make with the people in your life—family, friends, coworkers, etc.