One Night to Save the World: Overpopulation

The United Nations predicts the number of people on Earth will balloon to 9.8 billion by 2050 and 11.2 billion by 2100. Even as some countries witness a decline in fertility levels, roughly 83 million people are added to the global population every year.

So how worried should we be about overpopulation? Will Earth reach a breaking point, where the planet and its resources can no longer sustain so many people? And if that happens, what could humanity do to survive?

These questions and more were explored at the latest Science & Entertainment Exchange event, One Night to Save the World, where scientists and entertainment professionals envisioned an overpopulated future. In collaboration with A Hundred Years and The Imagined Futures, The Exchange brought together a group of interdisciplinary experts to brainstorm ideas and solutions about overpopulation for an afternoon. Then, in the evening, the group presented their ideas to a live audience at A Hundred Years’ Arts District headquarters.

Kicking off the discussion was Vince Bertoni, Director of the Los Angeles Department of City Planning, who spoke about the challenges of managing public policy in a growing city of more than 4 million people. As the head of the largest city planning department in the nation, he tries to tackle the issues of living in such a crowded metropolis, such as the housing crisis, homelessness, and traffic. But he also notes that overpopulation arises as a result of healthier residents and a better quality of life. 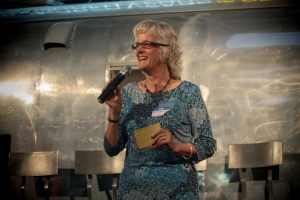 The next speaker switched gears from city planning to food sources. Alison Van Eenennaam, a Cooperative Extension Specialist in the field of Animal Genomics and Biotechnology at the University of California, Davis, aimed to challenge some strong beliefs held by the public about agriculture and food science that are not actually supported by scientific evidence.

“We may have over 9 billion people on Earth by 2050, and my job is finding out how we feed them all,” said Van Eenennaam. “One of the things I’d like to talk about is the importance of animal protein in that discussion, and I do that with some degree of trepidation to an audience in LA, but I’m going to go ahead and do that anyway.”

She proceeded to stun the audience with some seemingly counterintuitive statistics regarding animal agriculture and its environmental impact. For instance, getting rid of all animal agriculture in the United States would only lead to a 2.6 percent reduction in greenhouse gas emissions. If we all switched to the U.S. Department of Agriculture recommended diet, which includes more fruits and vegetables, it would actually have a negative effect on greenhouse gas emissions because we would have to eat more plants to make up for the caloric shortage. 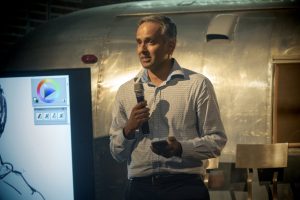 After Eenennaam’s talk, the next speaker made a powerful point that we need to distinguish the problems of overpopulation versus the fears of overpopulation. Karthick Ramakrishnan, a professor of Public Policy and Political Science at the University of California, Riverside, tied the current and historical fears of overpopulation to xenophobia. In 1924, for instance, the U.S. government shut down immigration due to a rising desire to take America back to an earlier time before so many incoming Eastern and Southern Europeans were crowding major cities.

He stressed that both media and entertainment have a responsibility to flip the negative propaganda about immigration and overpopulation. In an age where emotions seem to override facts, the storytellers of the world need to get involved and play their part in telling essential truths with the purpose of dissemination to the general public.

Lastly, the two entertainment professionals in the group— both screenwriters— pitched the audience their versions of a science-fiction movie that takes place in an overpopulated world.

Doug Jung, a writer and producer known for Star Trek: Beyond and The Cloverfield Paradox, painted a grim picture of our planet being ravaged by superstorms, climate change, nationalism, and water shortage. But a haven nation, Prosperia, emerges in the Sahara Desert of all places and manages to harness new technology to survive and thrive. In particular, its crowning achievement is the God Printer, a device that can construct almost anything from a molecular level. 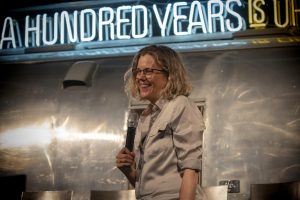 Stephany Folsom, screenwriter of the upcoming Toy Story 4, sees humanity living in fortifications to protect them from the harsh environment brought about by decades of climate change. While most people end up forming tribes, two scrappy outsiders make their living on the streets and have a dream of returning to a global community. They use genome editing combined with vaccinations to create a homogeneous— and very boring—society. In the end, the world realizes that we do not all need to be the same in order to get along and create a better world.