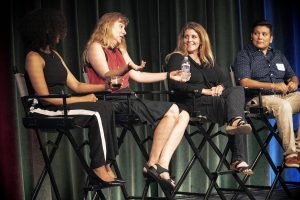 The United States is one of the leading forces of technological innovation in the world today. Simultaneously, this country has entered a new phase in which facts are not only ignored but disputed. False narratives take hold and can disrupt community and scientific progress alike.

In an effort to celebrate research efforts and set the facts straight from the cutting edge of an array of scientific fields, The Science & Entertainment Exchange organized the event The “F” Word: Facts, Scientists, and Storytelling in Our “Post-Fact” Era.

Experts from various fields gave presentations on their work before gathering for a panel. The event was in collaboration with the WGAW’s Committee of Women Writers, its Native American & Indigenous Writers Committee, and Writers Education Committee. It was co-sponsored and hosted by Google in its Venice, California, office. 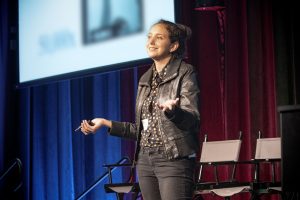 The first presentation was led by Dr. Rita Blaik, the Manager of Education at the California NanoSystems Institute at UCLA. An expert in nanoscience, her goal is to find new and innovative ways of communicating science to people from all walks of life.

Dr. Blaik began her talk by disputing Elon Musk’s public argument on Twitter about nanoscience “meaning nothing” by clarifying how it is specifically the study of the smallest molecules, such as proteins, viruses, and DNA structures. Cryo-electron microscopy, she described, is the latest advent in the field. By freezing and photographing a molecule, scientists can create a detailed 3D image of its structures, which means an exciting future for the development of new technologies and medicine.

Next up was Dr. Astra Bryant, an A.P. Giannini Postdoctoral Fellow at UCLA. Warning: this recap is potentially squirm inducing! Her research focuses on understanding how intestinal parasitic worms, such as hookworms and human threadworms, use heat and smell to seek out their hosts.

Dr. Bryant started with somewhat grim facts: more than 1 billion people are infected with parasitic worms. She has proven that the worm larvae (which enter through people’s feet) prioritize their targets by heat instead of odor, traveling toward the heat signature that matches that of their preferred host’s body. Continuing from her studies, scientists can create preventive strategies to disrupt the worms’ neural circuits in order to stop attacks on humans. 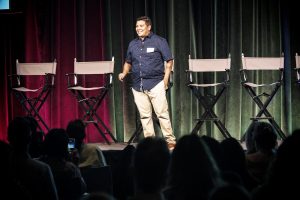 Up next was Ms. Honani, a Quality Assurance Engineer. The focus of her presentation was the software engineering work she does for her home community, the Hopi reservation in northern Arizona. Ms. Honani explained that she was a self-taught computer programmer, and there was no Internet in her community until 2004. She gained additional expertise working in satellite communications in the Navy and defense contracting.

Later in life, she joined the protests at Standing Rock before focusing her energies on solving a water crisis in her own backyard—arsenic pollution in the aquifers that sourced her reservation. She utilized coding to create apps that track data on the geography of the arsenic contamination. She also created websites to keep her community informed. Ms. Honani concluded that increasing the accessibility of technology in her community is a complex undertaking—it can bring opportunities to new generations but can also threaten the traditional values of the Hopi. 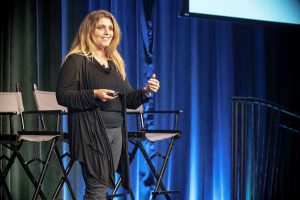 Dr. Tara Kerin was next. She’s an epidemiologist in pediatric infection disease at UCLA with an extensive background in molecular microbiology. Dr. Kerin referenced a slew of classic films from 12 Monkeys to Outbreak that center around viral epidemics, before showing a film of a virus entering a human cell. She explained the complex mechanics through which viruses trick the cell into attaching to the foreign body.

Dr. Kerin went on to discuss how vaccines are proven to work with almost zero rate of injury. Polio is a prime example in U.S. history and a current example elsewhere in the world. Many anti-vaccine movements are commonly started for non-scientific reasons (trying to sell their own brand of treatment, for instance) and with no basis in facts. Despite that, vaccine opt-out numbers are on the rise. 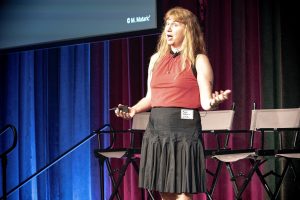 Following the epidemiology discussion was Dr. Maja Mataric, professor of computer science, neuroscience, and pediatrics at U.S.C. Dr. Mataric’s talk was all about the reality of robotics innovation and the varied philosophies that drive it.

She explained how robotics and A.I. are following a trajectory to replace as many jobs as possible. Dr. Mataric referenced the film Wall-E, which features a world in which obese humans have not a single task in the day to complete. In reality, such automation will put millions out of work. She urged that innovators should be creating robots that center around humanity in concrete, supportive ways, such as assistive robots designed for monitoring, coaching, and motivating people who need help in places such as cardiac surgery wards, autism clinics, or nursing homes. Dr. Mataric concluded that those types of robots would make for a brighter future than a flying car. 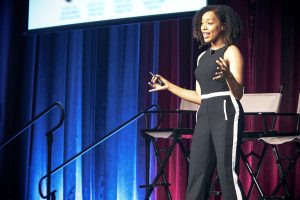 The final presentation was from Dr. Moogega Stricker, who has a Ph.D. in mechanical engineering. She currently works on NASA’s Mars 2020 Mission, where she is the Lead of Planetary Protection. Dr. Stricker first gave a run-down on the Mars Rover’s purpose: to take samples and look for bio-signatures on the surface of Mars and deliver them back to Earth in 2029. One of the huge challenges inherent to the project is making sure we do not bring any microbes from Earth to Mars and to prevent any potential foreign (i.e., alien) threats from hitching a ride back to Earth on the Rover. Dr. Stricker explained some of the tools at her disposal, such as an autoclave, which is a giant oven that sterilizes the Rover at 250 degrees Fahrenheit. She ended her presentation by summing up that “We’re trying to be good custodians for our universe.”

The scientists came onstage for a panel moderated by Mr. Dwayne Johnson-Cochrane, who is currently in pre-production as the creator and Executive Producer of the FX network series Heist 88.

Space Exploration: In regard to the Trump administration’s expansion of military space technology, Dr. Stricker was asked what she thinks should be the goals for space-related science. She answered that our goals should be to focus on gathering knowledge of the universe and to understand our own existence by discovering the stories of life on other planets.

Robot Uprising: In a room full of writers, this question was inevitable. What is the real threat with robots in the years to come? Dr. Mataric explained that an uprising a la Terminator was not likely. The real concern for her was the destruction of the modern-day workforce. She mentioned potential solutions such as universal basic income, but ultimately thought this would be the major challenge of the future.

The Facts: The question at the core of the night was how do scientists combat forces that question science and the facts on which science is built? Dr. Stricker responded that one strategy is to create an informed opinion with scientists across the globe. This opinion would be strong enough to outweigh any one community or government that ignores the facts. For example, they plan to share their Mars Rover samples with scientists in several countries upon its return.