The Science of Fear

Posted on November 1, 2017 by Meeri Kim
Written by: Meeri Kim

Horror movies have always given us plenty of nightmare fodder. Moments like the disturbing elevator full of blood in The Shining, Psycho’s famously chilling shower scene, and a possessed girl’s head spin in The Exorcist have burned themselves into our brains from the very first viewing.

But ultimately, we can relax and even enjoy being scared knowing the horrors will stay onscreen. It is the things out there in the real world—those that directly affect us and our loved ones—that have the ability to truly frighten.

In the spirit of Halloween, the latest Science & Entertainment Exchange event delved into such real-world terrors as war, torture, psychopaths, and cybercrime. Entertainment professionals and scientists packed a screening room at NeueHouse in Hollywood for “The Science of Fear,” which featured four brief talks and a panel discussion moderated by Christine Boylan.

Maheen Mausoof Adamson, the senior scientific research director for the Defense and Veterans Brain Injury Center at the Veterans Affairs Palo Alto Health Care System, kicked off the event by playing a jarring audio clip from the opening scene of Saving Private Ryan. She described seeing the movie as an undergraduate and cursing Steven Spielberg for overtaking her auditory and visual cortex with such frightening stimuli. 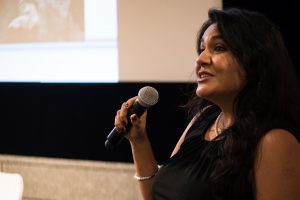 “I closed my eyes, but the entire sound just penetrated into my skull and turned it into this incredible visual of the entire thing that I was trying to avoid,” said Adamson. “It was really hard.”

Her research deals with helping those who have experienced such traumas of war firsthand to improve their daily function and reintegration into society. In particular, Adamson is interested in the connection between traumatic brain injury and posttraumatic stress disorder (PTSD), which go hand in hand for veterans and military personnel.

The second speaker, James Fallon, talked about the neurological and genetic correlates of psychopathy—and what happened when he unexpectedly found them within himself. As a neuroscientist at the University of California, Irvine, he has studied the brains of serial killers and other psychopaths using positron emission tomography (PET) scanning for more than a decade. 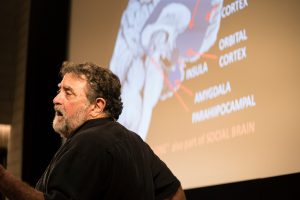 While sociopaths know what they are doing is wrong, psychopaths behave badly simply because they have a predatory nature. Psychopathy is characterized by no remorse, no moral reasoning, and no sense of emotional empathy.

“It’s hard to make a character who’s a real psychopath. You cannot make a compelling antagonist out of a psychopath because there’s nothing there,” said Fallon. “Breaking Bad, Dexter—these are great series, and I love them, but they ain’t true.”

In 2006, Fallon discovered to his surprise that he has the brain imaging pattern and genetic make-up of a full-blown psychopath. After a number of years of denial, he has finally accepted that he may be a “born” psychopath, but firmly believes having a good childhood and loving parents offset any drastic negative effects.

Next, Jonathan Marks, the director of the Bioethics Program at The Pennsylvania State University, spoke about the legal and ethical implications of exploiting fear during interrogation. Fear has long been a technique used in interrogation, but the standard approach was building a rapport—basically, trying to get someone to want to talk. However, the War on Terror employed aggressive interrogation methods akin to torture: confining prisoners in small boxes with insects, waterboarding, sleep deprivation, etc. 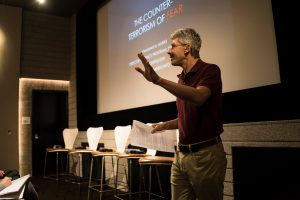 “This is the problem with torture, is that it leads people to do the very thing they think will make the torture stop,” said Marks. “And that means often telling their captors whatever it is they think they want to hear.”

As past evidence has shown, such extreme methods can lead to prisoners confessing to crimes they did not commit. Not only that, but experts believe the very abuses carried out at Guantanamo Bay caused additional terrorist attacks to occur.

While also speaking on the subject of terrorism, Supervisory Special Agent Michael Sohn of the Federal Bureau of Investigation shifted the discussion to the cyber side of crime. California leads the nation in victims and dollar losses from cyber crime, which mostly affects individuals and not large corporations. And much of these attacks happen because people fail to use simple precautionary measures like two-factor authentication. 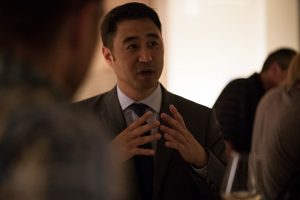 “From sophisticated attacks to the celebrity breaches you’ve heard about—that was one of the cases I just worked on—people are not doing the basic things,” said Sohn. “They’re not locking their doors.”

With the ubiquity of smartphones and connected devices in the home, cybercriminals have more ways than ever to exploit victims for money, identities, and information. Social engineering alone—for instance, impersonating a person you know via email and asking for money—is responsible for $5.2 billion in losses per year.

Sohn went on to describe how far hackers could potentially go in terms of disruption: turning off electrical grid systems, disrupting patients’ pacemakers/insulin pumps, manipulating medical records, or opening up a dam to cause flooding.

“This scares the bejesus out of me because now you don’t know what system to trust,” he said. “As we become more digital for everything we do, this is what scares me. This is what keeps me up at night.”