One Night to Save the World 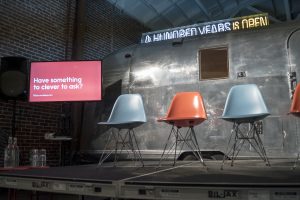 The year is 2117. You arrive home from work and your door knows your name. It opens for you. The lights dim to the precise brightness where you feel most relaxed. Your speakers are the perfect DJ—they play the exact song you want to hear without requesting it. You pull out your phone. Instead of giving it a command, you have a conversation with it.

This is the future envisioned by a panel of scientists and filmmakers at the One Night to Save the World event held this past Tuesday at A Hundred Years, an appropriate venue for a night devoted to exploring Artificial Intelligence (AI) and predicting how it will evolve in the next 100 years.

The first panel consisted of Nadine Lee, Oliver Seil, and Richard Socher, and was moderated by screenwriter Jon Spaihts. They envisioned the world in five years and discussed how AI alters our perception of what is “normal.” As a society, we have lost the freedom of anonymity. Our data are regularly aggregated to make predictions of what we will like as well as suggestions for services, products, and even lovers.

Numerous ethical problems have emerged from the increased prevalence of AI, from clear-cut dilemmas such as AI replacing human jobs and being weaponized for mass destruction, to less evident dangers such as the bias within AI. Granted, AI is only as smart as the data set you give it, but even removing gender and race from an algorithm for loan applications still does not account for what can be learned from something as innocuous as applicants’ zip codes.

The speakers agreed that not all problems need an AI solution and the growth of AI does not necessarily mean the end of the human workforce. Workers can be retrained to work in tandem with machines. The group also grappled with the idea that all machines will likely possess some form of bias.

The second panel, consisting of Marjory Blumenthal, Juston Johnson, Jeff Krichmar, and Michael Lejeune, moderated by screenwriter Eric Heisserer was tasked with envisioning the impact of AI 100 years into the future. The speakers predicted major advancements in fields such as health care and transportation in the near future. They envisioned universal health care with lifespans ranging from 350–500 years. On top of that, our society’s obsession with mobile games may be rewarded when a game is created that lets users kill patients’ cancer cells from their smart phones! 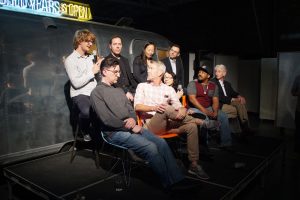 Jon Spaihts closed out the event with a statement on the flawed concept of Pandora’s Box as it relates to technology. The prevalent idea that self-aware machines are inherently dangerous has no evidence to back it up. He anticipates that humans will always find ways of working out problems, even if some of those problems are caused by AI. “I would simply urge a hopeful attitude about the unknown and a skeptical attitude about the tale of Pandora’s Box,” concluded Spaihts.