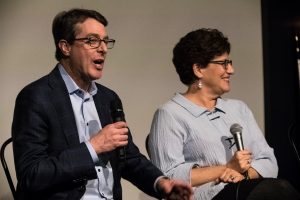 Do no harm. This basic tenant of the Hippocratic Oath is incredibly simple. But now, as we move into a future of radical transplant techniques, gene therapies, and evermore expensive pharmaceutical wonders, the advances in technology are coming face to face with the ethics around what can be done versus what should be done. The situation then becomes anything but simple for the physicians, patients, and bioethicists moving rapidly into the future of medical technology.

Recently, The Exchange and the Johns Hopkins University Berman Institute of Bioethics brought together thought leaders in the fields of medical technology and bioethics for a fascinating, and sometimes difficult, discussion about the questions raised when scientific advances run up against long entrenched practices, beliefs, and even superstitions.

Held at The Great Company in downtown Los Angeles, producer Wendy Calhoun (Empire, Justified, Nashville, and more) led an interactive discussion between the audience and thought leaders dealing with the bioethics, policy, and the societal impact of the innovative and radical advances in science and health that are, in some cases, already in use today. Joining Ms. Calhoun on the panel were the following speakers:

Divided into three major sections, the session featured a unique interactive approach. Each section opened with examples of real-world medical or scientific advances followed by questions and hypothetical scenarios that asked the audience to consider future situations where those advances would come into play. The responses, gathered via SMS text message, where instantly tallied and drove the conversation.

In the first section, the audience and panelists looked at Vascularized Composite Allografts (also known as VCAs). As described on dontatelife.net, an online organ donor resources website, VCAs involve the transplantation of multiple structures that may include skin, bone, muscles, blood vessels, nerves, and connective tissue. The most commonly known type of VCAs are for hand and face transplants, although there have also been several cases of uterus transplants. This groundbreaking form of therapy returns vital function and identity to people who have suffered a devastating injury or illness.

Among the questions posed to the audience involved their willingness to donate their faces, various limbs, or reproductive organs. Additional questions expanded the scope of the responses as well as demonstrated how some medical advances can come up against social attitudes when the audience was informed that there were no scientific or medical reasons why a transgendered woman could not receive a transplanted uterus. In this case, the audience overwhelmingly supported that suggested usage of the VCA procedure. From the panel, the issue really came down to the quality of life VCAs offer versus the quantity of life usually used as the determining factor in traditional, solid organ transplants.

“An ethical dilemma we have is that with regular organ transplants like kidneys, you’re committing to a lifetime of immunosuppressive drugs,” said panelist Dr. Segev. “So, you don’t have kidney failure, but you have a host of other risks to the other organ systems in your body from the drugs you must take. For VCAs, you’re talking about [the same commitment]. The question then becomes should we be exposing people to the substantial medical risk that comes with immunosuppressive drugs for what is, essentially, a cosmetic procedure?”

Dr. Geller and Dr. Kahn also weighed in to the conversation. Dr. Geller spoke about the “substantial psycho-social issues involved in these types of transplants” while Dr. Kahn spoke to the difficulty in getting informed consent from both donors and recipients. “When is the risk involved in VCAs overcome by the benefit? With regular transplants, we lay out the risks and ask people if they’re willing. That’s called informed consent. But for many of these [newer] operations, we have no idea how people will feel so we have no idea what to tell them. That makes it very hard to get that informed consent.”

From there, the discussion for the second section moved to gene editing and gene therapies. The specific technology in the example provided was CRISPR, a revolutionary gene editing technology that provides a precise, accessible, affordable tool whose potential uses are only just beginning to be revealed. The advent of this technology has opened a discussion about editing the human genome to eliminate and cure disease or even create enhanced “designer” babies.

Examples for this topic included genetically modifying mosquitos with the goal of containing or eliminating the spread of disease, “de-extinction” that involves re-introducing extinct lifeforms into the environment for ecological preservation reasons, and the controversial notion of chimera, which are human–animal hybrids created to server as transplant sources of human organs. These examples were followed by audience responses to scenarios ranging from effectiveness trials that would see genetically modified animals being released into a contained setting, up to and including how one might maintain oversight to prevent “rogue scientists” or other bad actors from using genetic manipulation technology in harmful or destructive ways.

For her part, Dr. Geller believes the biggest challenge in this area comes in the form of unintended consequences. Dr. Segev took that a step further stating, “For 20 years we’ve talked about gene therapy and for 20 years almost every experiment failed because of unintended consequences. What scares me more than anything else is people with good intentions that are moving too quickly to advance the technology and not testing the long-term repercussions.”

That statement led into a discussion of the danger potentials from bad actors. Dr. Khan feels it is less a matter of rogue scientists than it is the speed of progress occurring outside of any global standard. “Where this comes into play is in areas of the world where there’s just different or less oversight like India, Africa, or China. They’re doing really great work in China but there’s also the urge to be first. Although it’s being discussed in the scientific community, there’s not an agreed-upon model in place for how we make sure bad things don’t happen from this really good and interesting science that’s taking place.”

For the third and final section the explosive topic of drugs and drug pricing took center stage. In the United States, the Food and Drug Administration (FDA) regulates the pharmaceutical industry to ensure the drugs it sells are safe and work as advertised. While FDA can indirectly influence drug prices, it does not directly regulate prices. The prices are set by the drug manufacturers. The way things are currently structured, there are few tools available to control prices. Medicare, the single biggest purchaser of drugs in the United States, is barred from negotiating prices. How much should a treatment or a cure cost? Who should decide and how?

Cases presented showing how advances in treatment have been accompanied by skyrocketing prices in the United States included a hepatitis C treatment that replaces a grueling year-long program of oral and injected medications with a single 12-day oral course that costs a mere $84,000. This example was followed by a gene therapy to cure a rare inherited blindness that has been valued at more than $1 million per patient. A third example pointed out that Naloxone, a recognized treatment for opioid overdoses, has been in use for more than 20 years but the prices surged alongside the addiction epidemic rising from $600 per dose in 2013 to more than $4,500 today.

The discussion of this topic produced the biggest reaction from the audience and from the panelists and was also one of the thornier topics of the evening. Summarized by Dr. Kahn, part of why prices are so high here in the United States “is that our government doesn’t negotiate price. We pay a higher price here so other places [in the world] can pay a lower price there. The health care system in the United States subsidizes other areas. The argument from the people who set prices at the drug companies is if you want us to set prices differently, then you need to make the incentives different.”

The discussion on this last topic quickly became an open discussion on all of the issues presented and then moved to the after-event reception. It was clear that the challenges we are facing as technology progresses cannot be easily solved but they provide fertile ground for both philosophical discussion and, for the creative professionals in attendance, inspiration to explore in their work as well.