The historic Bradbury building, a significant architectural gem that may best represent the past, present, and future of downtown Los Angeles, is now home to the Berggruen Institute, a foundation that provides ideas for a changing world. The Institute was the location for a recent panel discussion on Unfolding Cities. Five flights of stairs up was where artists, scholars, writers, scientists, dreamers, and thinkers all gathered in a beautiful space with a privileged view of an immaculately designed interior to have a conversation on urban futures in science and fiction. The panel was presented by The Exchange and the Institute—the first partnership between these two revolutionary foundations.

Before the panel discussion began, screenwriter Stephany Folsom interviewed the panelists for a video podcast series while a mix of friends and strangers in the science and entertainment community mingled over snacks and cocktails. Soon enough, everyone gathered into the large office space for an introduction by the Institute’s own Nicolas Berggruen, who opened the panel with an appreciation of the new location:

“We are very grateful to be here in this building. This building is really about the future—it was the future when it was created, it was the future in movies … and it is the future again…. It’s an extraordinary thing … this building symbolizes thinking and living with a city that’s changed so many times. [This city] was incredibly vibrant 100 years ago downtown, then the vibrancy went away, it’s vibrant again, and I think that’s what we’re going to learn about tonight: how cities transform, what makes them special, what makes our connection as humans in cities: humanity.”

Rick Loverd, the program director for The Exchange, introduced the panel’s esteemed moderator Lisa Joy, the co-creator and executive producer of the acclaimed HBO series Westworld. Rachel Bauch, the director of public relations for the Berggruen Institute, introduced the four highly regarded panelists: Craig Hodgetts, Hao Jingfang, Ming Fung, and Hannah Landecker. Hodgetts is the lead designer for Elon Musk’s Hyperloop transportation system, as well as the co-founder and creative director for HplusF, an architecture and design studio co-founded by panelist Fung, who is also the director of design at HplusF. Fung is also a long-time head of faculty at the Southern California Institute of Architecture. Panelist Jingfang, 2016 Hugo Award–winning author of Folding Beijing, is a prolific science-fiction writer, an economist, and a visiting scholar at Harvard University. Social scientist Landecker is an author, the director of the UCLA Institute for Society and Genetics, and a Berggruen Institute fellow, starting in fall 2018. 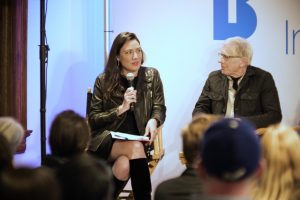 First-time moderator Joy led the 1-hour discussion on future cities, opening with a reminder of the Bradbury building’s significance in the original Blade Runner, a Ridley Scott film released 36 years ago with a futuristic perspective on the year 2019. Joy pointed out that although we are less than 1 year away, relatively speaking, cities still pretty much look the same as they did 36 years ago, in contrast to Scott’s dystopian prediction of a future Los Angeles with flying cars and holographic buildings. This led seamlessly to her opening question: Looking 30 years into our future, what do you think the major technological drivers will be for change?

Hodgetts responded first, expressing his thoughts that technology follows psychology. Fung echoed this sentiment with her belief that the physicality of cities will look similar in the future because of human nature. Jingfang agreed that as humans we have a lot of emotions in existing buildings and are not quick to destroy our history, and then painted a future city with artificial intelligence data monitoring systems and a central neurosystem making it essentially a giant organism that would develop more neural networks over time. For Landecker, the main driver for technological change is the consideration of a society with more people, so we will need to determine how technologies can help with the organization of a future with increased populations; that is, more water and more ways of being.

Increased population density came up throughout the evening, as well as considerations of building a future with ever-increasing political constraints. The panelists navigated through discussions of future identity and class structure as well as the recurring topic of intra- and intercity travel, but the standout theme of the evening was community.

In response to suggestions about augmented reality, Joy asked the panelists to consider if we manufactured a mass personalization of humanity, would that lead to a dissolution of community, and how would we respond to this, even on a cellular level?

Hodgetts advocated for more time with the family, more time in the “nest,” and less time in the car. He expressed his belief that community comes from escaping the office environment to places with more diversity and that advances in technology should be for a purpose: one that is beneficial to society in the context of community and home.

Landecker predicts that the future of urban architecture will manifest from within us. She pointed out that science has shown that social interaction makes us live longer, so it must be incorporated into urban design. She loves the ideas of raised running paths, infusing smart detection in the sewer systems, and anything that makes for a happier and healthier community. Her suggestions included smart placements of green spaces, especially for children, and the incorporation of walkability.

Fung agreed that having more social places is integral to community—to know what this looks like as far as the design of a future city we need to posit the question in terms of what people like to do from for leisure. This brought up an important question from Joy regarding the future of leisure and luxury and how future class systems might have different realities.

Jingfang expressed a pessimistic view regarding class discrepancy trends, citing a world in which some cultures are already years behind current technological advancements. She believes as time goes on there is a good chance richer classes in richer cultures with access to advanced technologies will only keep advancing, while poorer classes in poorer cultures may end up 100 years or more behind in terms of access to technology. She has a generally optimistic view of the future, however, and believes strongly in education for future generations. For Joy’s lightning round of what the panelists would most like to see in a future city, Jingfang responded that she wants a future with very fast intra-city transportation methods so we can have more face-to-face communication.

Hodgetts said he would like to see production disengage from a linear process and move to a more loosely structured one, also for the sake of face-to-face communication and connection, but through evolved processes that have us at home in our communities more and moving around in the city less.

Fung’s ideal future city is a system of networks with more access to community and less feeling alienated. Joy mentioned she would like to see fewer cars servicing more people, more individuality and no AI apocalypse (a reference to her show Westworld). Landecker reiterated her suggestion of walkability, mentioning to Hodgetts, “Maybe we can have a walking track next to the Hyperloop.”

As the discussion drew to a close, the panelists fielded questions from the audience. One came from a city government employee from Culver City, who was seeking practical advice for the future imaginings of their city. The evening was a riveting discourse between a lively panel of scholars and creatives, but that question held the heart of what The Exchange and the Institute are all about: great minds affecting real change.

To be a part of the change, check out The Exchange to see how you can get involved and nominate the next great thinker for the Berggruen Prize for Philosophy and Culture before June 30 at www.berggruen.org.