Cyber Civics: Securing the Vote for 2020

Celebrating a lighthearted milestone of its 10th anniversary during the nation’s marking of midterm elections, The Science & Entertainment Exchange recently returned to New York City’s Lower East Side arts venue Caveat for an informed and witty Friday evening discussion and Q&A titled “Cyber Civics: Securing the Vote for 2020,” which involved issues behind the current U.S. election process and the future of voting.

As the cozy crowd of science and media professionals settled into seats with craft beverages, the Exchange’s deputy director Ann Merchant and program director Rick Loverd introduced them to the evening’s engaging panel speakers, computer scientist Juan Gilbert, mathematician Moon Duchin, and political scientist Andrea Jones-Rooy. Gilbert and Duchin both participated as committee members in the National Academies’ Fall 2018 report “Securing the Vote: Protecting American Democracy,” and Jones-Rooy literally balances her science career accomplishments with a pastime in trapeze and a steady footing in the city’s stand-up comedy scene. 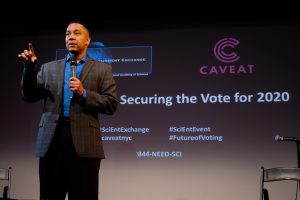 Gilbert emerged first from the sidestage huddle, promptly diving into a discussion of the 2000 election and ensuing problems with hanging and pregnant “chads” on voting ballots that prompted Congress to create the Help America Vote Act, requiring every voting precinct to have at least one “accessible voting machine.” Gilbert, professor and Chair of the Computer & Information Science & Engineering department at the University of Florida, called up Congress to convey that the action did not make sense to him because it was creating a separate but equal connotation for people with disabilities versus everyone else.

When the United States Election Assistance Commission responded that “there’s no other way to do it,” he started working in 2003 to create the technology for the very first version of Prime III, the only open source voting system currently used in state, federal, and local elections in the United States to date. “We proved them wrong with what we did. We created one voting machine that everyone could vote on, independent of your ability or disability,” he said, referencing individuals who might not see, hear, read, or have arms. After several years of testing with “every imaginable demographic,” the state of New Hampshire went statewide with the technology in 2014, with Butler County in Ohio to follow in this past election. 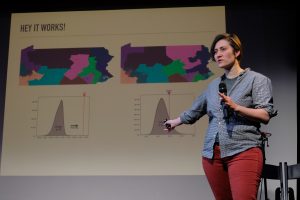 Duchin further connected dots to the present day with a visually dynamic slide show, providing a lens into her research from launching the Metric Geometry and Gerrymandering Group, a Boston-based working group that studies applications of geometry and computing to U.S. redistricting. With colorful photos, state diagrams, and a manageable number of data graphs, she explained, “Once upon a time, if you wanted to know a district was carefully arranged to do something fishy, probably the tell-tale sign was that it was shaped like something disgusting.” However, computers have unfortunately resulted in the death of this “eyeball test,” said Duchin, an associate professor of Mathematics at Tufts University, and Director of its interdisciplinary Science, Technology, and Society program.

“Districts don’t have to look bad to do bad… This kind of analytical power makes it possible to create districts that perform in some very specific way, without necessarily looking like those ugly districts of yore,” she acknowledged, but later reassured the crowd of the benefits in harnessing the power of scientific computing. “In a way this is a story that computers got us into this problem, but the good news I come bearing is that maybe we’re ready for computers to dig us back out,” she said, referencing the famous redistricting cases of the nation’s courts and legislatures that hinge on hard math and computer science. 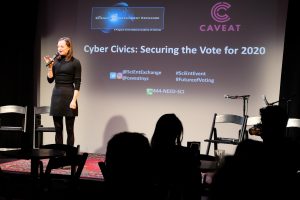 With added comedy relief, Jones-Rooy deftly navigated the room’s potentially gloomy subject matter, filling the room with laughter. During her segment of the evening, she capsulized her political science work in the diversity space, discussing her work as a faculty member at New York University’s Center for Data Science and as a research consultant, including her work on FiveThirtyEight editor-in-chief Nate Silver’s midterm election forecast. Describing underlying problems with which political scientists have struggled for more than 70 years involving Arrow’s Theorem, representation, and proportion, she issued a “call to arms” to anyone who wants to pursue research on people of color in positions of government power.

“We get very excited about the technology behind voting and the math behind the germinate, and all that is super important, but it all boils down to how hard it is to vote, that’s the thing that we really can change,” she commented, outlining the detrimental effects of voter ID laws, registration requirements, and poll locations on voter turnout.

“I’m a big advocate of making voting a holiday in the United States. [That’s] not my idea, but it’s a good idea,” she stated, further imploring those in attendance to help all people get more resources to vote. “So many precincts, especially where people of color are voting, are understaffed and underresourced, so you have to wait in line for ever and ever and ever, and you don’t get to vote, and that’s part of the story.”