The evening began like any other Exchange event, with delicious drinks and lively conversation in a room packed with scientists and entertainment professionals. It was the night before Halloween, but the atmosphere felt festive and lighthearted—that is, until the networking hour was rudely interrupted by a fairly loud argument. Near the back bar, a man and a woman raised their voices at each other in anger. 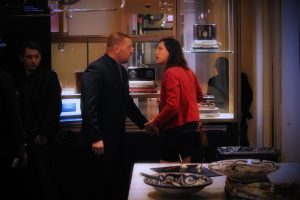 While nearby event-goers turned their heads to check out the commotion, most went back to their own conversations after the man led the woman away toward a different part of the room. But others took notice of the suspicious couple and suddenly found themselves witnessing the man choking on something. He struggled to breathe, collapsed, and died a few minutes later. 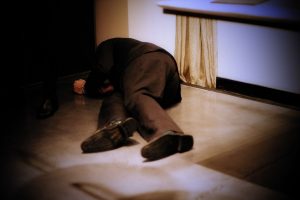 Fortunately, as the crowd found out soon enough, the man was only acting as part of The Exchange’s latest event, “Murder and Mayhem.” Held at NeueHouse in Los Angeles, the evening focused on the different ways in which science can help solve crimes, using the staged murder as a prime whodunit example to dissect. The two speakers—one an expert on eyewitness testimony and the other a forensic chemist—questioned the audience on what happened, who killed the man, and how the killer could have done it. The theatrical component was created by Delusion, an interactive theater company that incorporates the audience into the story as characters.

“When the cops come on the scene, the first thing they do is ask people what they saw. So what I’m going to do tonight, before I launch into some of the science of this, is ask what you saw,” said Thomas Albright, National Academy of Sciences member and director of the Vision Center Laboratory at the Salk Institute for Biological Studies. “What happened? Did anybody see anything?” 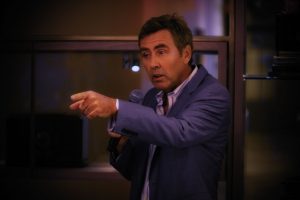 One person said she saw a fight break out between the couple, while another noticed the man coughing and starting to choke. Many in the room suspected foul play rather than a natural death, since the argument between the two seemed serious and could have given her a motive to kill.

Albright, who specializes in scientific approaches to eyewitness identification, emphasized that so many people in the room saw different fragments of the crime in question, which ultimately makes it very difficult for the police to piece together the truth. And on top of that, eyewitnesses are not always reliable, yet people can be convicted solely based on this sometimes-shaky evidence.

“To date, there are over 350 of these so-called DNA-based exonerations, and a reasonable question to ask is what was the primary reason why the person was convicted to begin with?” said Albright, referring to the Innocence Project’s work to use DNA testing to exonerate wrongly convicted individuals. “In nearly three-quarters of these cases, it was eyewitness identification—or more properly, eyewitness misidentification.”

In 2014, Albright and his colleagues put together a National Academies of Sciences, Engineering, and Medicine report called Identifying the Culprit: Assessing Eyewitness Identification, where they looked at the scientific evidence behind eyewitness testimony and why people make mistakes. He outlined three main factors that influence the reliability of eyewitness identification: uncertainty, since human vision is far from perfect; bias, or preconceived notions about the world that we use to fill in the blanks; and confidence in what we saw, even if it did not actually happen.

The next speaker revealed her own bias right off the bat. Since she used to work in a crime lab as a forensic chemist, Raychelle Burks confessed to seeing murder everywhere she looks. After asking the crowd for testimony, she proceeded to explore the idea of poison as the cause of death, since the man was seen holding a drink before he died. 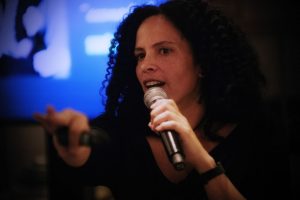 “Ethylene glycol—antifreeze—works like a charm. Lead acetate is easy to get, also works great, and like ethylene glycol, is very sweet,” said Burks. “Then there’s cyanide, which is very famous, very historical, and very, very fast.”

To figure out if and how the victim was poisoned, Burks suggested looking at the color of his skin. Cherry red indicates carbon monoxide poisoning, whereas blue points to cyanosis, or a lack of oxygen saturation in the tissues near the skin.

If the signs point to poison, the next step is to find out the method of administration. She ruled out poison gas, since no one else in the room was affected. The drink is a possibility, but no one in the room saw whether he actually took a sip. But multiple event-goers did see the woman touch and possibly grab the victim. Could a person be poisoned by touch alone?

“Some poisons can be administered by touch. Does anyone remember Kim Jong Un’s brother that was assassinated?” she asked the crowd. “That was by touch. Fairly innocuous precursors mixed together on his face—boom, nerve agent, dead.”

To wrap up the evening’s charade, Burks revealed the clues that would unravel the case. First, the man wore a bracelet, not as decorative jewelry but rather a medical ID bracelet that indicated he had a severe peanut allergy. Second, he touched his chest while choking, not because he was having a heart attack, but because he needed to grab his Epipen, which had curiously gone missing. Lastly, the woman ate a peanut-packed Payday candy bar right before kissing him, which was enough to trigger a fatal allergic reaction. Case closed.